↓
Home→Daily→Monday: The Meaning of the Trumpets

In portraying God’s interventions on behalf of His people, Revelation uses the imagery of trumpets in the Old Testament. Trumpets were an important part of the daily life of ancient Israel (see Num. 10:8-10 and 2 Chron. 13:14-15). Their sound reminded people of the worship in the temple; trumpets were also blown in battle, at harvesttime, and during festivals. 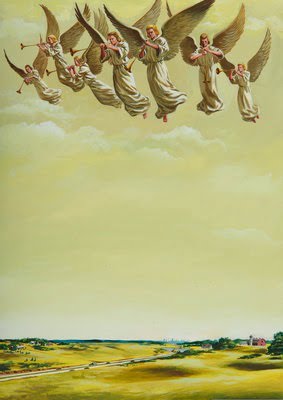 Blowing trumpets went hand in hand with prayer. During worship in the temple or during the festivals, the trumpets “reminded” God of His covenant with His people. They also reminded people to be ready for the “day of the LORD” (Joel 2:1). During battle, the trumpet sound gave key instruction and warnings and called upon God to save His people. This concept is the backdrop for the trumpets in Revelation.

The events triggered by the trumpets in Revelation denote God’s intervention in history in response to the prayers of His people. While the seals concern primarily those who profess to be God’s people, the trumpets herald judgments against the inhabitants of the earth (Rev. 8:13). At the same time, they are warnings for those who dwell on the earth to bring them to repentance before it is too late.

The seven trumpets cover the course of events from John’s time until the conclusion of this earth’s history (Rev. 11:15-18). They are blown while intercession goes on in heaven (Rev. 8:3-6) and the gospel is being preached on earth (Rev. 10:8-11:14). The judgments of the trumpets are partial; they affect only one third of creation. The seventh trumpet announces that the time has arrived for God to assume His rightful rule. The seven trumpets apply approximately to the same periods covered by the seven churches and the seven seals: