Unfortunately, the opposition that the Jews encountered from the surrounding nations, as described in Ezra chapters 4-6, left them afraid and unwilling to work on the temple.

As mentioned before, Ezra 4:6-6:22 is not written in chronological order. Therefore, we will look at chapter 5 before chapter 4.

Read Ezra 5:1-5. Why does God send the prophets Haggai and Zechariah to the Jews? What is the result of their prophesying? 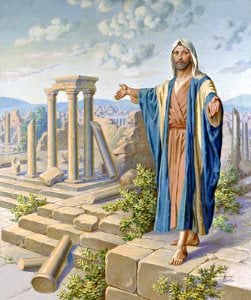 The Jews had stopped building because they were afraid. But God had sent them to Judah to rebuild the temple and the city, and He had a plan. Since they were afraid, He had to do something in order to encourage them. Therefore, He called two prophets to step in. Human opposition doesn’t stop God; even if the Jews contributed to this opposition by their own actions, God did not abandon them. He worked through the prophets to motivate and propel them into action again.

Read Haggai 1:1-15. What is the message for them, and what can we take away from this for ourselves?

“The prophets Haggai and Zechariah were raised up to meet the crisis. In stirring testimonies these appointed messengers revealed to the people the cause of their troubles. The lack of temporal prosperity was the result of a neglect to put God’s interests first, the prophets declared. Had the Israelites honored God, had they shown Him due respect and courtesy, by making the building of His house their first work, they would have invited His presence and blessing” – Ellen G. White, Prophets and Kings, pages 573, 574.