In the midst of one of the darkest times of David’s life there is good news: God sends His prophet. Nathan and David knew each other well. Earlier, Nathan had counseled David on his plans to build a temple (2 Samuel 7). Now, though, the prophet comes with a different task to perform for his king.

Why do you think Nathan chooses to tell a story rather than naming and shaming David immediately? Read 2 Samuel 12:1-14. 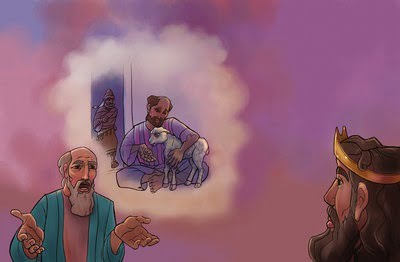 Nathan knew what to say, and he said it in a way that David could understand. He told a story that David, the former shepherd, could relate to. He knew David’s highly developed sense of justice and integrity. Thus, in a sense, one could say that Nathan set a trap and that David walked right into it.

When David unwittingly pronounces his own death sentence, Nathan tells him “You are the man” (2 Samuel 12:7). There are different ways of saying “You are the man.” One can shout it, one can accuse and stick a finger right into the other person’s face, or one can express concern and care. Nathan’s words must have been laced with grace. At that moment, David must have felt the pain that God must feel when one of His sons or daughters knowingly steps outside of His will. Something clicked in David’s mind. Something tore in his heart.

David recognized that sin, which makes our heart restless, is primarily an affront against God, the Creator and Redeemer. We hurt ourselves; we affect others. We bring disgrace to our families or churches. Yet ultimately, we hurt God and drive another nail into the rough beam pointing heavenward on Golgotha.

“The prophet’s rebuke touched the heart of David; conscience was aroused; his guilt appeared in all its enormity. His soul was bowed in penitence before God. With trembling lips he said, ‘I have sinned against the Lord.’ All wrong done to others reaches back from the injured one to God. David had committed a grievous sin, toward both Uriah and Bathsheba, and he keenly felt this. But infinitely greater was his sin against God.” — Ellen G. White, Patriarchs and Prophets, p. 722.