In the world that we know, predation is a common way of life among the animals. 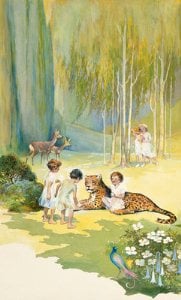 The term “food chain” is a familiar reminder of the importance of predation in our ecology, and we have difficulty imagining a world without it. But in the beginning, all land creatures ate green plants (Gen. 1:30). No animals fed on other animals. Genesis 1:30 does not mention the food of the sea creatures, but the same principles would likely apply, so that God could review the entire Creation and declare it “very good.”

Read Genesis 6:11-13, 9:2-4. By the time of the Flood, what changes had occurred in nature? What further deterioration occurred in the relationship of humankind and beast after the Flood?

What had started as a peaceful kingdom had become filled with corruption, violence, and evil. These are the results of sin. The world that once was “very good” had become so bad that it called for its own destruction.

After the Flood, the animals became afraid of humans. This included the creatures of land, air, and sea. This is obviously in contrast to the previous situation. It appears that the dominion of humans over the animals was reduced at this time.

Read Isaiah 65:25, 11:6-9. How are the relationships among the creatures in our present world different from those promised by God in the future?

Through the beauty of this poetic language, Isaiah shows us that there will be no violence in the new world. Corruption and violence, those characteristics of the pre-flood world that called for their destruction, will both be absent from the new one. It will be a world of harmony and cooperation, a peaceable kingdom. We are so used to violence, predation, and death that it’s hard for us to imagine anything else.

As we can see, the gospel is so much about restoration. Though, of course, God alone can do the final restoration, what choices can we make that can help to bring about some needed restoration now?