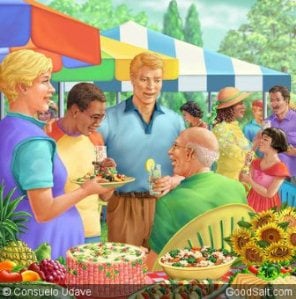 When Jesus looked at the crowds of people, He was filled with compassion (see Matt. 9:36). Sometimes we may think that Jesus simply saw the crowd, but, in reality, He saw each individual that made up the crowd. In the same way, we should be aware of the individuals in the crowds through which we walk and in which we live. Our church can be aware of individuals in the crowd only as church members interact on an individual basis with those who are in their sphere of influence.

Read John 1:37–42. Why do you think Andrew told his brother about finding the Messiah before he told anyone else?

Andrew had been a disciple of John the Baptist, and as John’s ministry was to prepare the way for Jesus, it is understandable that some disciples made the transition to following Jesus. Andrew’s conversation with Jesus excited him so much that he immediately went looking for the person closest to him, the brother with whom he had spent many long nights fishing on the Sea of Galilee.

Read John 1:43–50. Look at what was going on there. What interpersonal relations are revealed here? In what way does Philip respond to Nathanael’s skepticism? What lessons can we take from this story that can help us to understand how personal witnessing works?

The early movement to follow Jesus seems to have gained momentum through social networking in the Capernaum and Bethsaida areas. Notice that Philip does not argue when Nathanael has doubts that the Messiah would come from a small, insignificant, rural village. He just issues a simple invitation, “Come and see.”

To whom are those in your immediate vicinity could you do better at witnessing? How much self-sacrifice will it take on your part for you to be a better witness to them?