↓
Home » Negative Feelings Play a Positive Role in Our Salvation

For it is not possible for the blood of bulls and goats to take away sins. Hebrews 10:4 NLT

To me, a lot is said in the brief passage above. It tells me no one was ever saved by the Old Covenant. Those who lived and died before Jesus came were never saved by the law or by the Old Covenant. Before and after the cross, everyone is saved by grace and by the New Covenant. The same law of ten commandments exist in both the Old and New Testament while it never saved anyone in the Old or New Testament. Obedience has always been the goal in both the Old and New Covenant ,but it was never the means to attaining salvation. It is grace that gives us obedience. See Ephesians 2:8-10.

The purpose of the animal sacrifices were to help those in Old Testament times to look forward to the cross of Christ for the forgiveness of their sins. Many animal rights activists and animal lovers have wondered why God would  design a daily sacrificial system where countless animals would be killed every day. 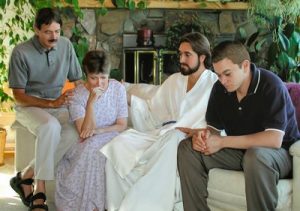 I can’t really blame those in the Old Testament who became callous in regard to the daily animal sacrifices. A while back I was praying to God and casually thanked Him for sending Jesus to die for me. As soon as I said “Thank you for dying for me” I realized I had just said that as casually as I would thank someone who bought my lunch! I had to remind myself of the awesome sacrifice Jesus made for me on the cross, and that He deserved more of a thank you than someone who just treated me to lunch. As someone participating in the New Covenant I need to allow myself to fully grasp the awfulness of my sin. This is hard when we are conditioned these days to “stay positive” and avoid being negative. We love popular preachers who motivate us and make us feel good about ourselves. But do negative feelings and emotions still have a part in our New Covenant lives? James says they do.

Negative feelings and emotions play a positive role in our lives. They bring us to true repentance and true salvation which brings us to true joy. They teach us to avoid sin which destroys true joy.

So I don’t become callous to the blood of Jesus the way many in Old Testament times became callous to the blood of animals, I need to keep fresh in my mind the reality of Jesus’ sacrifice on the cross. No wonder so many inspired hymn writers wrote hymns such as  “Jesus, keep me near the cross” and “When I survey the wondrous cross on which the prince of glory died. My richest gain I count as loss and pour contempt on all my pride.” And “my trophies at last I lay down, I will cling to the old rugged cross.” No wonder an inspired author wrote:

It would be well for us to spend a thoughtful hour each day in contemplation of the life of Christ. We should take it point by point, and let the imagination grasp each scene, especially the closing ones. As we thus dwell upon His great sacrifice for us, our confidence in Him will be more constant, our love will be quickened, and we shall be more deeply imbued with His spirit. If we would be saved at last, we must learn the lesson of penitence and humiliation at the foot of the cross. -Ellen White, Desire of Ages, Page 83.

This is my prayer…

Dear Jesus I am sorry for the times I thanked you for dying for me the same casual way I thank someone for buying my lunch. Also I want to express how deeply I appreciate your awesome sacrifice not just by my words or even tears alone. I need the power of your blood to not only forgive my sins but to also empower me to live a life of obedience and thanksgiving. I want everything I do to shout “I love you Jesus!” In the name of Jesus I pray, amen.