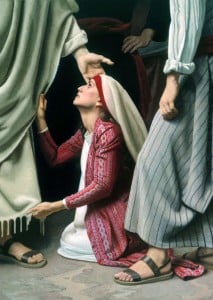 “because she thought, If I just touch his clothes, I will be healed.” Mark 5:28, NIV

Twelve years before, two events had taken place that would come together later on a single day in Jesus’ ministry.  At that time, Jesus himself was a young man still working in Joseph’s carpenter shop in Nazareth. He had not yet been baptized by John. He had not called any disciples. Few thought of him as anything but Joseph and Mary’s son, one of several children in his family.

Although the plan was not visible to others, the groundwork for his future ministry was being laid. The first event was entirely normal.  A baby girl was born to an influential family. They were excited at the birth of the child but had no premonition of that future day. Filled with joy, they only looked forward to filling their daughter’s life with happiness and love as they watched her grow into a woman.

The second event was not one of joy. A woman, who had already passed the joyous years of childhood, began to bleed. Filled with fear, she sought the medical care then available. Nothing could be done to staunch the bleeding. Considered unclean by others because of the flow, she found her social life over.  She must have been humiliated and filled with despair. Where could she turn? Those who have suffered a chronic ailment know that there comes a time when death can seem preferable to continuing with the burden.  But one day word came to her about Jesus, the Healer.

She had no money to offer a healer, other healers had taken all she had over the twelve years she had been ill.  Besides, she felt like such a pitiable wretch that she could not bear to stand before Jesus and ask for healing. Because of her impurity, her condition was so much worse than everyone else’s.  She could not talk about it without feeling the redness of shame rising in her face. But perhaps there was a way. Perhaps if she could just touch Him, that would be enough. Maybe there was hope. She set out to find Jesus.

As she sought Jesus, the little girl born twelve years before became ill and began to die. Where the woman seeking Jesus now had hope, the parents of this little girl were losing theirs. With broken hearts, they watched helplessly the suffering of their daughter. Hearing that Jesus, the Healer, was in town, her father, Jairus, set out to find Him. If Jesus could arrive before she died, He could heal her.  Finding Jesus, he humbly fell at His feet and begged Him to come and touch her that she might be healed. Together, they headed for Jairus’s home.

Then the bleeding woman found Jesus and touched Him. Knowing that He had healed someone, Jesus stopped and called her to Him. Feeling that the healing she now felt might be taken from her, she came to Him, fell at His feet, and confessed her need.  But the only words he had for her were words of reassurance. (See 1 John 1:9) Her joy at healing returned, and she went away with peace in her heart.  All had shunned her before because of her uncleanness, but Jesus had called her “Daughter.”  In doing so, He placed her on equal footing with Jairus’s daughter in God’s love.

Seeing the delay as Jesus dealt with this woman, Jairus was no doubt filled with anxiety about his own situation. He knew his daughter’s life was in the balance.  He struggled to maintain his faith that all would be well. But as he wrestled with these thoughts, he was told that his daughter had died and was beyond need now.  Like Martha concerning her brother Lazarus (See John 11:21), Jairus was tempted to give up hope because Jesus had not made it to his home before his daughter died. However, Jesus reassured him as he reassured Martha that all would be well. Wanting to believe, he accompanied Jesus to his home, fearful to see his daughter dead. 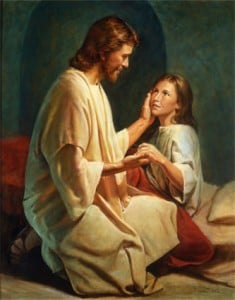 When they arrived, mourners were already there. Putting them out, Jesus, Jairus and his wife, Peter, James, and John all went in with the girl. Taking her hand, Jesus raised her from death and told her parents to feed her. This was to assure them that she was indeed herself and not a ghost or apparition. (See Luke 24:36-43) Just as the woman earlier that day had received grace from a loving God, they now knew the joy and peace of God’s love as it visited their home.

Jesus urged them to be silent about the miracle, but why? Was it because Jesus’ fame over the event would grow so much that He could not perform His ministry? Probably not since the story could not be suppressed. How could you hide the fact that someone who had died was now very much alive and walking about? Many people had witnessed the child’s death, including those that had come and told Jairus that she had died while he was returning with Jesus.

Perhaps Jesus urged them not to tell the story because He knew all too well the human heart. While the story would be told at first out of joy and thankfulness, it might become a matter of pride and a cause of stumbling. After all, Jairus was the ruler of the synagogue. Perhaps some, maybe even Jairus, might come to think it was because of his position that the miracle took place. Perhaps he had obtained special favor with God because of his service. Didn’t Jesus show great regard for Jairus by coming to his house? In this manner, the blessing could become a curse. It was much better to let the miracle speak for itself and not risk embellishment.

These two miracles illustrate two aspects of God’s love. The first was a woman who was alive but knew her need of healing. She came seeking healing and found it. The second was a child who was dead and had no knowledge of her need. She could not seek healing. Instead God sought her and gave her life because of the faith of others. The woman sought Jesus because others told her about him. She already knew she had a need before she heard of the Answer. There are many today who are like her. They know their need. They are just waiting for someone to point them to Jesus. Once someone does, they will come to Him driven by their need.

The 12-year-old girl is like those who do not know their need. They are people we all know who seem to have little interest in coming to God. We know that they have a need, but they do not see it. God still seeks them out. Our prayers come to Him on their behalf, just as Jairus came to Jesus on his daughter’s behalf.  As his faith was rewarded, ours can be also.  Tempted to give up when all seemed hopeless, Jairus listened when Jesus told him to just continue to believe.  We must do the same when others seem beyond hope to us. We must continue to believe and ask for God’s love to intervene. Jesus reassures us “With man this is impossible, but not with God; all things are possible with God.” Mark 10:27, NIV

God’s will is for us to sense our own need and come to Him. He will heal us. His love assures us of that. He also wants us to believe that others can be healed with His love and to have faith that this will happen.

Just like Jairus, I plan to keep believing that those I love are not beyond God’s love. I will keep praying for them. Wouldn’t you like to do that for someone you love, too?