↓
Home→Daily→Tuesday: The Ordinance of Humility 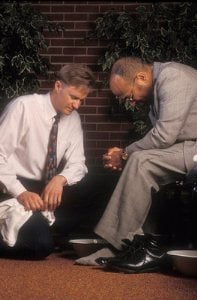 He – about to face the Cross, the greatest humiliation possible – saw the jealousy and infighting among His own disciples over who would be the greatest in His kingdom.

Our world is so twisted and perverted by sin that we have it all backward, however ‘rational’ and ‘sensible’ backward may seem. Who in their right mind would rather be the one serving than the one served? Is not the whole point of life to get ahead, to become wealthy, and to be someone who is waited on and attended to by others rather than being the ones who serve? It’s no wonder, then, that at the Last Supper, Jesus washed the disciples’ feet. No words He would have said could have conveyed the truth of what real greatness is in the eyes of God more forcefully than His washing the feet of those who should have been kissing His.

What does John 13:1-17 teach us about foot-washing as a part of the communion service?

So much amazing truth rings out through these verses. In verse 3 it says that Jesus knew that the Father had given “all things into His hands”. What happens next? Yes, Jesus, knowing full well that “He had come from God and was going to God”(NKJV), rose from the meal and started washing the disciples’ feet (vs. 5). Even without fully knowing whom Jesus really was, they must have been astonished. How could they have failed to see the lesson there?

Before claiming for ourselves all that Christ has done for us, how important it is to come to the Lord’s Supper with a sense of our own humbleness and lowliness and need of divine grace.

Whose feet might it do you some immense spiritual good to wash?