What? You say you’ve never met a porcupine? I’ll bet you have. In fact, you may be one yourself. I’m pretty sure I am.

“The German philosopher Schopenhauer compared the human race to a bunch of porcupines huddling together on a cold winter’s night. He said, ‘The colder it gets outside, the more we huddle together for warmth; but the closer we get to one another, the more we hurt one another with our sharp quills. And in the lonely night of earth’s winter eventually we begin to drift apart and wander out on our own and freeze to death in our loneliness.’”1

So, have you been hurt lately? Have you thought you might be better off outside in the cold? Have you hurt one of your fellow porcupines causing them to wander out on their own? How can we stay together as a church when we keep hurting each other?

Excellent question…except most of us already know the answer.

My clients are intellectually delayed adults who live in group homes. Most of them have roommates and they get into the same types of squabbles and disagreements as folks in the 3rd, 4th, or 5th grade might get into. One of the things I help them with, individually, is getting along better with their roommates and housemates. We work hard on learning to apologize to and forgive each other. And I’d be surprised at how hard it is for them, except I know how hard it is for me.

That’s a problem for every one of us, isn’t it? We feel like making an apology is showing weakness. Of course, we’d be happy to forgive them, as long as they apologize first…right?

Think about it, would you rather be right (and out in the cold) or forgiven (and in the warmth with the rest of the porcupines)?

Hang on! Think about your answer…what are you willing to do to back up your choice?

“Then after some days Paul said to Barnabas, ‘Let us now go back 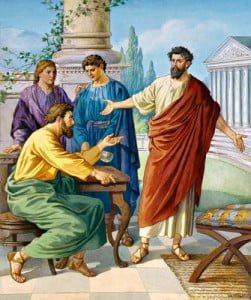 and visit our brethren in every city where we have preached the word of the Lord, and see how they are doing.’ Now Barnabas was determined to take with them John called Mark. But Paul insisted that they should not take with them the one who had departed from them in Pamphylia, and had not gone with them to the work. Then the contention became so sharp that they parted from one another. And so Barnabas took Mark and sailed to Cyprus; but Paul chose Silas and departed, being commended by the brethren to the grace of God. And he went through Syria and Cilicia, strengthening the churches.” Acts 15:36-41

Did you get that? “The contention became so sharp that they parted from one another.” Now we know that God used their separation to increase the spread of the gospel, but Paul and Barnabas had to have been really mad at each other.

Wait a minute! Christians don’t get mad at each other, do they? We don’t disagree about anything, right? We certainly don’t ever disagree about how church work should be done.

Ahem…we’d better think about that again.

The big problem is not that we disagree about methodology from time to time, but the way we handle the disagreement. How often do we “agree to disagree” and then go on about our business? What tends to happen more often, is that we get our feelings hurt and instead of going back to that person and talking to them about it, we go to our friends and tell them how rude so-and-so was. So now, all of our friends are upset too. They tell their friends and pretty soon we have factions in the church and long standing feuds. And Satan wins because nobody is spreading the Gospel anymore, we’re all too busy poking each other with our big, puffed out, porcupine quills.

But what’s the answer? How do Christians handle disagreements and differences of opinion?

I’m glad you asked…because Jesus has the answer!

“Moreover if your brother sins against you, go and tell him his fault between you and him alone. If he hears you, you have gained your brother. But if he will not hear, take with you one or two more, that ‘by the mouth of two or three witnesses every word may be established.’ And if he refuses to hear them, tell it to the church. But if he refuses even to hear the church, let him be to you like a heathen and a tax collector.” Matthew 18:15-17

Bummer! I guess that means I have to talk to the person and try to settle things first. And the text says “you and him alone.” That does not mean standing in the church parking lot yelling at each other.

I think the trick is to first put off any kind of discussion until both of us has cooled off. Then we can meet privately and discuss, calmly, where things went off the tracks. Then, we can try to figure out how to keep it from happening again. Of course, then we don’t get the satisfaction of hearing our friends commiserate with us over what a terrible person that other person is for disagreeing with us.

We know that Paul and Barnabas and John Mark worked through their issues without splintering the early church. Years later, can you imagine them sitting around reminiscing about the disagreement and laughing at themselves? I can.

“Weren’t we silly,” they’d say, shaking their heads. John Mark would laugh and remember how young, homesick and overwhelmed he was. Paul would remember how angry he’d gotten at John Mark and then at Barnabas for defending him. But then John Mark would thank Barnabas for his patience with him as he matured both emotionally and spiritually. He’d thank Paul for giving him a second chance. They’d smile and realize that “… all things work together for good to them that love God, to them who are the called according to his purpose.” Romans 8:28

Here are some guidelines I’ve come up with for myself. I’m not saying I always use them, but, I have them.

1. Don’t take things too personally. Everybody has bad days and sometimes they just don’t realize how sharply and/or dismissively they’ve spoken.
2. Don’t spread my hurt feeling around. Nobody needs to know except the person who hurt those feelings.
3. It’s not all about me. It’s about Jesus and how best to spread His truth.
4. Apologize often. Relationships are more important that being right.
5. Forgive freely – even when the apology never comes.

“When the laborers have an abiding Christ in their own souls, when all selfishness is dead, when there is no rivalry, no strife for the supremacy, when oneness exists, when they sanctify themselves, so that love for one another is seen and felt, then the showers of the grace of the Holy Spirit will just as surely come upon them as that God’s promise will never fail in one jot or tittle.” (Ellen G. White, Selected Messages, book 1, p. 175)

From the sanctuary, we can learn that we are all equally in need of Christ’s atoning sacrifice. We all need Jesus, and He will not only forgive but clean us up from the inside out. And while He is doing that, we need to be patient with each other.