↓
Home→Beliefs About the Body of Christ→Church - Fundamental Belief 12→The Radical Politics of Our First GC President, John Byington 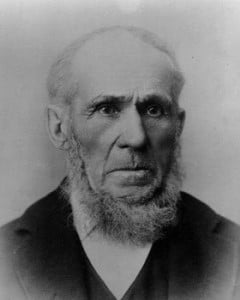 Probably the image most Adventists have of Elder John Byington is based on the only photograph they’ve ever seen which portrays the aged patriarch as a silver-haired, balding, bearded, wrinkled, scowling preacher in a black frockcoat and white shirt buttoned tightly around the neck. Consequently, they might be surprised to learn that he was a loving, devoted husband to two wives – Mary Ferris (1823-1829) and Catharine Newton (1830-1885) – for more than sixty years; a warm-hearted but firm father to eight children; and a generous grandpa and great-grandpa to seventeen grandchildren and great-grandchildren who loved to visit him “down on the farm.” Indeed, the Byington’s family reunions made the front page of Battle Creek’s leading newspaper. Despite being busy with farm and church duties, John and Catharine frequently visited, wrote letters to, and prayed earnestly for their scattered family members living in Michigan, New York, New Jersey, and Kansas.

Even Adventists who have heard that Elder Byington never received a salary from the church probably don’t know that the reason he could volunteer his services was that the Byingtons operated profitable farms. In New York John and Catharine owned 200 acres of prime land with 87 farm animals; every year they sold tons of hay, wheat, corn, oats, and potatoes and hundreds of pounds of butter, cheese, and maple syrup as far away as Boston, New York City, and Philadelphia. When they moved to Michigan in 1858, they bought 340 acres and sold a variety of fruits, vegetables, grains, hides, honey, and Catharine’s homemade mittens and candles in nearby towns. In addition, John sold calendars, repaired teeth, and made loans at ten percent interest. In short, the Byingtons operated profit-making agribusinesses that netted them hundreds of dollars in profits each year. Unlike conservative Adventists, however, the family ate meat, drank tea and coffee, and bought insurance policies (especially after their barn burned).

Perhaps one reason why the Byingtons’ lifestyle differed from other Adventists is that for half a century, the family had been Methodists. John’s brother Jared had helped to establish the Methodist-Episcopal Church in Connecticut in 1799; their father Justus, a circuit-riding preacher in Vermont, had played a key role in founding the Methodist Protestant Church in 1829. For nearly four decades after his conversion in 1816, John himself became a licensed preacher of Methodism in Vermont and New York, and in his forties, he helped form the new Wesleyan Methodist Church in St. Lawrence County, New York. Indeed, prior to his conversion to Sabbath-keeping Adventism in 1852, John had built Methodist chapels and parsonages in Bucks Bridge, Morley, and Lisbon, New York. To a certain extent, Elder Byington remained a “Seventh-day Methodist” throughout his long life (1798-1887), subscribing to the Methodist paper The Christian Advocate, reading John Wesley’s sermons, and regularly attending Methodist (as well as many other) Sunday services. In 1886, only months before he died, Byington recommended in the Review that Adventist social meetings should be revised to follow the pattern of Methodist class meetings.

As early as the 1830s, John was active in the short-lived Anti-Masonic Party which opposed membership in all secret societies. In the 1840s, he chaired conventions of the Liberty Party (1843-1848) and the Free Soil Party (1848-1852), both formed to end slavery in the United States. After the Republican Party was created in 1854, John and Catharine became life-long voting members of that party.

In part, the Byingtons’ involvement in the Wesleyan Methodist Church and in the Liberty and Free Soil parties reflected their strong abolitionist views. John’s brother Anson, who in the 1830s and 1840s was president of the Chittenden County, Vermont Anti-Slavery Society, had been expelled from the Congregational Church in 1849 for his abolitionist views and cancelled his subscription to the Advent Review and Sabbath Herald in 1859 because he felt that Uriah Smith did not advocate abolitionism strongly enough. John himself frequently chaired meetings of the St. Lawrence County Anti-Slavery Society, participated in abolitionist conventions, and—along with several other Byingtons and their Hilliard cousins—signed petitions in the 1850s demanding that the U.S. Congress abolish slavery, which he called “an outrage” and “a sin.” New evidence indicates that Anson and John Byington actively assisted fugitive slaves in escaping to Canada along the famous Underground Railroad which ran through Bucks Bridge in St. Lawrence County. Throughout his life Elder Byington enjoyed a close relationship with African Americans like Sojourner Truth and during his travels around Michigan, he was a frequent guest in the Hardy and Minesie homes, Black Adventists living near New Caledonia and Jamestown.

To a significant degree, Elder Byington remained a circuit-riding revivalist preacher throughout his life. Unlike his Adventist ministerial colleagues, he did not receive a salary either from the Michigan Conference or from the General Conference; he did not conduct evangelistic tent meetings to convert non-Adventists; he did not preach long doctrinal sermons or write books on theology. Instead, he and Catharine set out to cheer the discouraged, reconcile differences, urge repentance, and build faith and unity by holding revival, testimony, prayer, quarterly, social, and business meetings; by preaching short homilies about heaven, grace, prayer, conversion, and perseverance; and by visiting and praying with every family in every Adventist congregation in his vast parish. To prepare for this mission, they began every New Year with fasting and prayer. Then they covered hundreds of back roads by horse, buggy, sleigh, and foot and traversed muddy quagmires, snow-drifted fields, dusty paths, and rock-strewn highways, facing carriage accidents, disease, and frequent opposition. Yet during his thirty-five-year ministry, Elder Byington witnessed stronger congregations, faith healings, hundreds of baptisms, and a tightly unified, rapidly growing denomination.

The Byingtons themselves contributed significantly to help make the Seventh-day Adventist Church grow in numbers and unity. John believed firmly that “God is a God of order in temporal as well as spiritual matters.” In 1853 his daughter Martha taught the first Adventist home school; in 1854 his wife Catharine taught the second (after Rochester, New York) children’s Sabbath school; and in 1855 John built the third (after Jackson and Battle Creek, Michigan) Adventist meetinghouse in Bucks Bridge, New York. Called to Michigan in 1857, Elder Byington spent the next thirty years combating heresies, organizing local churches, promoting “Gospel order” and systematic benevolence, and helping to create new institutions such as the Review and Herald, the Michigan Conference, the General Conference, the Western Health Reform Institute (where his son Fletcher served as a physician), and Battle Creek College. In addition, he served as the first General Conference president (1863-1865); helped to secure noncombatant status for Adventist soldiers; chaired numerous church committees; and held ministerial credentials into his eighty-eighth year.

As a busy family man, farmer, preacher, and administrator, Byington had little time for writing books, tracts, and articles. Instead, he penned short letters, reports, and two- or three-paragraph exhortations to readers of the Review and Youth’s Instructor reflecting his optimistic, can-do spirit and deep piety. Unlike the heavy doctrinal and theological sermons sent in by his ministerial colleagues, John wrote homilies emphasizing the need for homes “permeated with prayer” and offered sage advice about a wide spectrum of practical Christian living. While he strongly opposed some of the popular fads of his day (debating schools, bloomers, croquet, and spiritualism), he also played the role of an Adventist “Dear Abby” in his question-and-answer column in the Youth’s Instructor. His final written contribution (“Peace with God”) appeared in the Bible Echo in May 1887 four months after his death. In it he made the point that justification “has no reference to our good works,” but to Christ’s forgiveness of our sins, and that unless “the Holy Spirit fills the heart, we cannot have peace with God.” But if the Spirit dwells within us, he added, we can have grace, power, and a “hope that reaches forward to the heavenly rest.” In these few words, Elder John Byington aptly summarized the underlying theme of his ministry and, in a sense, staked his position on a contentious issue that would be debated at the Minneapolis General Conference the following year.