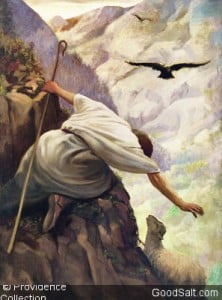 Have you burned any bridges lately? Are you sure? Could you have burned a bridge without being aware of doing it? Next time you’re sitting in church, take a look around. Are there some folks missing? I don’t mean like on-vacation missing, but folks who haven’t been to church for maybe a month or two … or maybe a year or two. Maybe you can’t remember when he (or she) was last at church. You don’t know when he slipped away, but you realize you haven’t seen him in a really long time.

Actually, it’s kind of a sensitive situation, isn’t it? We’re not talking about someone who has never heard the truth before. This is a person who has walked in the truth but has turned away for one reason or another. How do we approach a missing member in a way that will not make the situation worse?

Chances are, the missing member didn’t quit coming because he changed his mind about what the truth was. A person quits attending church not on the basis of logic, but of feelings.

The easiest to trace is a situation in which a member had a disagreement with someone and quit coming to church because either his feelings were hurt or he just felt uncomfortable being around the person with whom he’d had the disagreement. That’s an obvious burnt bridge. Even though it’s more easily seen, it may be very difficult to fix. Hurt feelings that have been left to sit are really hard to soothe.

Sometimes, though, it’s not so much hurt feelings. Sometimes a person has lost the person in the family who kind of gave the family direction, or he just can’t imagine going to church without the person he sat next to for the last however many years. The problem isn’t hurt feelings, but too many feelings.

Maybe, though, there wasn’t one pivotal event that caused this person to quit coming to church. Maybe, as the years have gone by, he started feeling more and more invisible or unimportant. So one week he just stayed home. When nobody called to check, he just figured that nobody missed him. He might as well stay home another week or two. And he’s never been back.

I know what you’re thinking. “What’s your point, so-and-so hasn’t been to church in a while – what’s that got to do with me? I didn’t do anything to him.”

You know what, you may be absolutely right. You may have had nothing to do with that person not coming to church anymore … but does that mean you and I don’t have any obligation to try to bring them back?

“‘What man of you, having a hundred sheep, if he loses one of them, does not leave the ninety-nine in the wilderness, and go after the one which is lost until he finds it? And when he has found it, he lays it on his shoulders, rejoicing. And when he comes home, he calls together his friends and neighbors, saying to them, “Rejoice with me, for I have found my sheep which was lost!” I say to you that likewise there will be more joy in heaven over one sinner who repents than over ninety-nine just persons who need no repentance.’” Matthew 15:4-7

It sounds to me like every single one of us is important to God. We spend quite a bit of time talking about the prodigal son – he knew he was lost and found his way back, and that’s fantastic. But sometimes, people can’t find their own way back into the safety of the church. They don’t know how to make that first step. They need our help.

“In the parables of the lost sheep and lost piece of silver, Jesus illustrated heaven’s attitude toward the backslidden—They should be carefully and tenderly led and educated as pupils in school. … They need the tenderest sympathy and the most judicious help; they should be carefully instructed; and should be prayed for and prayed with, watched and guarded with the kindest solicitude. Those who have fallen under temptation and have backslidden from God, need help. This class is represented in the lessons of Christ by the lost sheep. The shepherd left the ninety and nine in the wilderness, and hunted for the one lost sheep until he found it; he then returned with rejoicing, bearing it on his shoulder. Also by the illustration of the woman who searched for the lost piece of silver until she found it, and called together her neighbors to rejoice with her that the lost was found. The connection of heavenly angels with the Christian’s work is here brought clearly to light. There is more joy in the presence of the angels in heaven over one sinner that repents than over ninety and nine just persons who need no repentance. There is joy with the Father and with Christ. All heaven is interested in the salvation of man. He who is instrumental in saving a soul is at liberty to rejoice; for angels of God have witnessed his efforts with the most intense interest, and rejoice with him in his success.” (E.G. White, Testimonies for the Church 4, p263-264.)

You may or may not have heard the story of a man named Lt. Hiroo Onada. On March 10, 1974, Lt. Onada became the last World War II Japanese soldier to surrender. Think about that date for a minute – 1974. Wow!

Lt. Onada was just 22 years old when he was dropped off on the island of Lubang in the Philippines on December 25, 1944. His orders were to “carry on the mission even if Japan surrenders.”

For almost 30 years, people tried to convince him to surrender. They talked to him through loudspeakers, trying to explain that Japan had surrendered and was now an ally of the United States. They dropped leaflets to him letting him know that if he would surrender he could go home to Japan. But he would not surrender.

“Over the years he lived off the land and raided the fields and gardens of local citizens. He was responsible for killing at least 30 nationals during his 29 year personal war. Almost a half million dollars was spent trying to locate and convince him to surrender. 13,000 men were used to try to locate him.
“Finally, on March 10, 1974, almost 30 years after World War II ended, Onada surrendered his rusty sword after receiving a personal command from his former superior officer, who read the terms of the cease-fire order. Onada handed his sword to President Marcos, who pardoned him. The war was over.
“Onada was 22-years-old when left on the island. He returned a prematurely aged man of 52. Onada stated, ‘Nothing pleasant happened in the 29 years in the jungle.’”1

Do you know somebody who is out there in the wilderness, who doesn’t know he (or she) doesn’t have to fight the battle by himself (or herself) anymore? Jesus has won the war so that all of His sheep can be safely in His fold. It’s time to bring all the lost sheep home. It isn’t important why they left or who burned the bridge. What’s important is that we reach out to them and tell them that we love them and want them to come back and that Jesus loves them and died for them.

Time is short – we have lots of work to finish!