The mission of sharing His love and truth with the entire world must have seemed overwhelming to this small group of disciples. 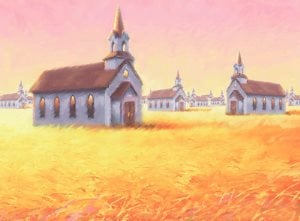 The challenge was enormous, the task immense. Its accomplishment in their lifetime might certainly have seemed impossible (as it can in ours). The best estimates are that the population of the Roman Empire in the first century was approximately sixty to seventy million. According to the first chapter of Acts, one 120 believers met in the upper room on the day of Pentecost. This is a ratio of 1 Christian to approximately every 500,000 to 580,000 people in the empire. From a human standpoint, Jesus’ command to preach the gospel to the world seemed unthinkable.

Read Acts 2. What were the results of the outpouring of the Holy Spirit on the mission of the early church?

The results were astounding. The Christian church exploded in growth. Tens of thousands were converted. The message of Jesus’ love was carried to the remotest parts of the empire.

Pliny the Younger, governor of the Roman province of Bithynia on the northern coast of modern Turkey, wrote to Emperor Trajan around A.D. 110. Pliny described the official trials he was conducting to find and execute Christians. “Many of every age, of every social class, even of both sexes, are being called to trial and will be called. Not cities alone but villages in even rural areas have been invaded by the infection of this superstition” (Christianity).

This quote is remarkable. It reveals that in a few generations Christianity had invaded nearly every level of society even in the remote provinces.

Ninety years later, around A.D. 200, Tertullian, a Roman lawyer turned Christian, wrote a defiant letter to the Roman magistrates defending Christianity. He boasted that “nearly all the citizens of all the cities are Christians.”

The story of the book of Acts is the story of a revived church committed to witness for its Lord. Spiritual revival always leads to passionate witness. Sharing is the natural outgrowth of a transformed life. Jesus said to His disciples, “ ‘Follow Me, and I will make you fishers of men’ ” (Matt. 4:19). The closer we follow Jesus, the more we care about what He cares about. If we have little interest in sharing His love with others, it may be because we are following Him at a distance and need a personal spiritual revival.