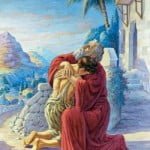 While Paul has lofty expectations for the nature of the Christian life (Gal. 5:16), his counsel to the believers in Galatians 6:1 also is refreshingly realistic. Humans are not perfect, and even the most dedicated Christians are not immune from mistakes. In Greek, Paul’s words in Galatians 5:16 indicate that he is envisioning a situation that is likely to happen in the church at some time. Paul gives the Galatians practical advice on how to deal with such situations when they arise. 1

How should Christians respond when a fellow believer falls into some sinful behavior? Gal. 6:1, Matt. 18:15–17.

To benefit from Paul’s advice in Galatians 6:1, we need to understand the precise type of situation that Paul has in mind. This revolves around two words used in the first half of the sentence. The first word is caught (ESV) or overtaken (KJV). It literally means “to be detected, overtaken, or surprised.” The context and different nuances associated with this word suggest that Paul has two aspects in mind. It refers not only to a believer who “catches” another believer in the act of some wrongdoing but also to the process by which a person finds himself “overtaken” by a behavior (see Prov. 5:22) that, under the best of circumstances, he would have chosen to avoid.

The likelihood that the wrongdoing Paul is discussing is not deliberate is evident from the terminology he uses. The word translated “fault” (KJV) or “sin” (NIV), which comes from the Greek word paraptoma, does not refer to a deliberate sin but rather to a mistake, a stumble, or a false step. The latter makes particular sense in light of Paul’s previous comments about “walking” in the Spirit. Although this in no way excuses the person’s mistake, it makes clear that Paul is not dealing with a case of defiant sin (1 Cor. 5:1–5).

The proper response in such circumstances should not be punishment, condemnation, or disfellowship but restoration. The Greek word translated “restore” is katartizo and means “to mend” or “to put in order.” In the New Testament it is used of “mending” fishnets (Matt. 4:21), and it describes the process of setting a broken bone as a medical term in Greek literature. In the same way that we would not abandon a fellow believer who fell and broke a leg, as members of the body of Christ we should gently care for our brothers and sisters in Christ who may stumble and fall as we walk together on the path to God’s kingdom.

Instead of practicing Matthew 18:15–17, why do we so often talk badly about the person we’re angry with, let our anger simmer against the person, or even plan revenge?