According to Paul, what two things characterized the world situation at the time he wrote? 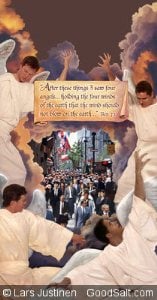 How do we see the great controversy revealed in these verses? 2 Thess. 2:6–7.

Combining these verses with the previous ones, we can see that Paul is outlining three stages of history from his time until the end. The final stage begins at the Second Coming. Before this stage is the revelation of the man of sin (2 Thess. 2:3),also known as the lawless one (2 Thess. 2:8). And before that stage is a time of mystery and restraint (2 Thess 2:6–7).

While we would like very much to fully understand Paul’s meaning here, there are a number of uncertainties in these verses. The restraining power is neuter (a thing) in verse 6 and masculine (a person) in verse 7. The lawless one (masculine,vs. 8) is neuter in verse 7 (“mystery of lawlessness”), neither is it clear (vs. 7) whether the restraining power is taken out of the way or has the authority to remove himself (the ESV translates correctly- “until he is out of the way”).

Who is the restrainer, or power of restraint, in these verses? It is present in Paul’s day; it is upholding the law (a power that restrains lawlessness, vs. 7); it is on a divine time mission; and it is powerful enough to restrain the working of Satan(vs. 9).

In much of the New Testament the events leading up to the Second Coming follow from the final proclamation of the gospel (Matt. 24:14; Mark 13:10; Rev. 14:6–7). In this case, then, it’s possible that God Himself is the Restrainer Paul is talking about, holding the final events back until everyone has had a chance to hear the gospel.

How much restraining do you need in your life? That is, when tempted, how can you learn to claim the power of God to restrain you from doing what you know is wrong?