Somehow, and we don’t know exactly why, sin arose in God’s perfect Creation, and that sin became the starting point for what we understand as the great controversy. One thing, though, we do know, and very well too: as human beings, we are caught in the middle of this controversy. It’s a battle that none of us escape. 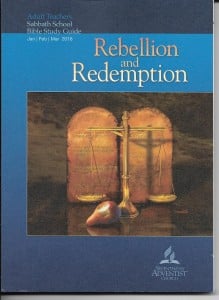 It wasn’t, though, supposed to be that way, not in the beginning. Creation was “very good” and “blessed” by God. Although the Lord was recognized as the Sustainer of this perfect Creation, He gave Adam and Eve the responsibility of taking care of what He had made for them. The great controversy came to earth when Satan deceived Adam and Eve with flattery and deception, diverting their allegiance from God to himself. Had they remained faithful to what God had told them, had they obeyed His simple commands, the world as we know it, with all its miseries, trials, and suffering, would never had arisen.

“Satan’s efforts to misrepresent the character of God, to cause men to cherish a false conception of the Creator, and thus to regard Him with fear and hate rather than with love; his endeavors to set aside the divine law, leading the people to think themselves free from its requirements; and his persecution of those who dare to resist his deceptions, have been steadfastly pursued in all ages. They may be traced in the history of patriarchs, prophets, and apostles, of martyrs and reformers.”-Ellen G. White, The Great Controversy, pp. 12, 13.

In answer to this tragedy, God, who had foreseen all this happening “before the foundation of the world” (Eph. 1:4), put in place His rescue plan. It’s what we know as the plan of Redemption. This Redemption is prefigured in the account of God meeting with Abram in Genesis 15, when He passed between the animal pieces. The ancient ceremony was an assurance to Abram; and thus, to all of us that God is personally involved in providing a solution to the problem caused by sin.

It is in this overarching context that we see Satan’s insatiable passion to deface creation and to obliterate God’s people. His strategies are revealed in the Bible, were good and evil are played out between siblings, in families, and in besieged nations. It is seen in times of oppression, famine, slavery, and exile; in frustrated attempts to rebuild after disaster; in divided loyalties and the enticement of idolatrous practices.

Throughout Scripture, God is constantly defeating Satan’s purposes. Jesus’ coming as Immanuel, “God with us,” recovered the territory stolen from Adam and Eve. Jesus succeeded where Adam failed. In His ministry He showed His authority over creation and the forces of evil. Just before His return to heaven, He recommissioned His followers and at Pentecost empowered them to extend the borders of His heavenly kingdom.

Jesus has won the decisive victory at the cross. The challenge has always been where we place our loyalties, on the side that has won or on the side that has lost. Though the choice should be easy and obvious, because the controversy still rages and the deceptions are ever-present, the battle for our hearts and minds continues. Our hope and prayer, then, is that this quarter’s lessons will reveal some of these deceptions and thus help us not just to choose Christ but to remain with Him because, as He has promised, “‘He who endures to the end shall be saved’” (Matt. 24:13, NKJV).

David Tasker, field secretary of the South Pacific Division, has a PhD in Old Testament, and has been a church pastor in his native New Zealand, mission president in Solomon Islands, and lecturer in Biblical Studies at Pacific Adventist University (Papua New Guinea), and Adventist International Institute of Advanced Studies (Philippines). He and his wife Carol have two married sons (Nathan and Stephen) and three grandchildren.