Bring the full tithe into the storehouse,
that there may be food in my house.
And thereby put me to the test, says the Lord of hosts,
if I will not open the windows of heaven for you
and pour down for you a blessing until there is no more need. Malachi 3:10 ESV 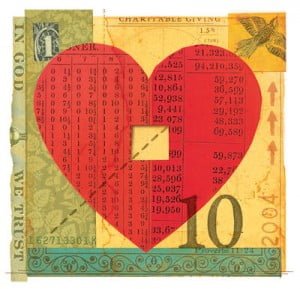 I was four-going-on-five when my father died. My oldest sister was married, two others were college age and the one closest to me was 12. Mother was a young widow in her mid-forties, though I thought anyone that age was old. We were left with a house and very little else. Mother would have to go to work doing something but what?

She was an accomplished musician, but there was little market for her abilities in our neck of the woods. Over the next few years, she would bring in enough money as a piano and voice teacher to supplement the “widow’s pension” the government paid her as surviving spouse of a veteran.

We didn’t have much, but we never went hungry. She kept food on the table and a roof over our heads.

In the summer, she would buy fifty-cent bushels of “cull” tomatoes from a cousin who had a truck farm, and we’d can quarts and quarts of tomatoes and juice. He’d supply us with corn and green beans that went into jars for the winter as well.

The same cousin would take produce to the farmers’ market in the city. What he didn’t sell, he’d put in baskets to leave on doorsteps on his way home. It was so exciting to find two quarts of beautiful strawberries that Mother and I danced around the kitchen.

Tithing was second nature to Mother. When her “widow’s pension” would come in the mail, as soon as the check was cashed, she would take out ten percent and put it in a separate slot in Daddy’s brown leather wallet she always carried.

Some of the parents of her music students were prompt with their payments, while others would stall and make excuses. It didn’t make her happy, but she would go ahead and spend the 30 minutes teaching the child and hope for payment “someday”.

Once, we were in town shopping for food. There wasn’t enough money to buy everything we needed. Mother looked in that little compartment that held the tithe for that month. If she used it, she could pay it back later. The temptation was there, but so was her resolve. No, she would leave it where it was, and we’d be okay. She paid for our purchases, and we left the store.

Walking down the sidewalk to the car, we met the mother of one of her music students. The lady asked, “How much do I owe you?” After Mother pulled out her little notebook and looked up the record, the lady counted out the money and handed it over.

Mother took the cash, figured the 10% and put the tithe in the compartment in Daddy’s wallet. We went back into the store and bought everything we needed and then some.

Showers of blessing? I think so.