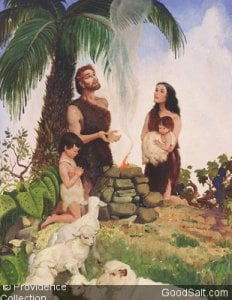 Those who have children often wonder how two children in the same family can be so different? One child may be shy and retiring while their sibling is a social butterfly, glowing with delight when surrounded by others and always ready for a party.

When spiritual issues are at stake, parents often fret over their children. Wondering what they did wrong in raising their child when the child shows little interest in church or God, they beat themselves emotionally over their perceived failure.

Self recrimination is as old as Adam and Eve. The first couple was probably closer to understanding God than anyone since the fall save Jesus. Wouldn’t such a home have every advantage in raising children in the “nurture and admonition” of the Lord? After all, God spoke directly with Adam and Eve and also with their sons Cain and Abel. You would expect children raised that way to turn out perfect, following God and serving Him in everything.

But that is far from the truth. Although they had every advantage, one son served God faithfully, while the other, Cain, chose to go his own way. That path even included killing his younger brother, Abel. Abel was followed by another brother who was faithful, Seth. And with Seth and Cain were established two lineages: the sons of God, and the sons of men.

The differences between the two were based on a foundation of how they related to God. The descendants of Seth chose to accept God on His terms. They listened to what He had to say and ordered their lives according to His leading. The descendants of Cain, however, believed that God should accept them on their terms. Cain felt that if he was a farmer and offered vegetables, his offering should be accepted and God should not expect something different. After all, it was the state of his heart and not what he was offering that mattered, right? God certainly would not be picky enough to demand something he did not have.  It was fine for Abel to offer a sheep, he was a shepherd. That was appropriate, but it was also appropriate that he accept vegetables from someone who grew crops instead of tending sheep.

We find such an attitude even today with some. God should accept me as I am and not expect me to offer something different with my means, my time, or my life. After all, He called me as I was. Why not continue to accept me and my lifestyle as He found me? That seems only fair and loving.

But the Bible is clear on basing our relationship to God on our human reasoning. “There is a way that seems right to a man, but in the end it leads to death.” Proverbs 14:12, NIV In the very beginning, God tried to warn Cain about this. He said that if we choose to go our own way instead of doing what is truly right then “sin is crouching” at the door. Sin leads only to death. (See Romans 6:23)

God warned Adam and Eve to avoid the Tree of the Knowledge of Good and Evil because He knew it would bring death in its wake. He did not want to see the death of His lovely creation. But when they were offered a choice, the first couple chose to rely on their own discernment rather than what God had told them. In this initial digression from the righteous path, they sowed the seeds that would bring about the sons and daughters of men that began with Cain.

What is miraculous is that in spite of the influence of the great first transgression, some chose instead to “…call on the name of the Lord.” Genesis 4:26, NIV Ever since, God has had those who chose His way rather than their own. Enoch, Noah, Abraham, and Joseph are examples. They chose to live as sons of God rather than as men with no greater vision than their own ideas and desires.

At times, those of the godly line were few in number. In Noah’s day it came down to only those of his family. All others perished.  The earth was overwhelmed with the flood of evil the sons of men had brought forth on the earth. God responded to that flood with a flood of his own. Water cleansed the earth for a new start. On an altar, Noah sealed the covenant that gave mankind a second chance once the flood waters receded. Still speaking with man directly, God honored that sacrifice with the rainbow, a symbol recognizing those who are willing to be led by God.

Through their lives, the sons and daughters of God are lights of God’s love shining in the world as a counterpoint to the lives of the sons and daughters of men. These latter live lives that proclaim they do not need God to lead them as they have minds of their own, and they are perfectly capable of making their own decisions about what is right and wrong. They have a methodology for determining what is reliable and what is not, and God does not enter into the process. They believe this methodology is universally applicable. Therefore, they are not pleased with the children of God who continue to live by a different standard. These saints demonstrate by their lives that there is another possibility than basing life solely on human intellect and what it is able to discern.

There is a light in the human heart that wants to believe that there is more to life than the logical dictates of intellect. That light is a burning ember of faith kept ablaze by the Holy Spirit. It is what sets the children of God apart. They are guided by that ember to seek something more than their human minds is able to provide. They are prompted to seek a relationship with their Creator. Some spend their whole life suppressing that fire, denying its voice speaking to their hearts. Others readily give themselves to this fire burning within (See Luke 24:32) and find peace and joy greater than anything they have ever known when their relationship to God is restored.

Jesus told us that those who felt the fire within would be very few before He comes again. The light would become as rare as it was in the days of Noah. (See Matthew 24:37-39) He said that if He did not intervene quickly the saints would all be lost. (See verse 22) But He assures us that a remnant will remain until He returns to bring everything to a close. The light in the hearts of His children will be the supreme act of faith and worship that will continue to burn to keep alive the lineage of the sons of God. As Cain killed Abel, the sons of men will try to extinguish that light by argument and artifice. But as long as we remember who we are, and we continue to recognize that we are children of our Creator and God that fire will continue.

I want that fire to live in me and never go out. I want the peace and joy that comes from a relationship with God. I want the joy of His voice speaking into every moment as I walk in His love as He reveals His heart, His loving character to me. I want the joy of having a wonderful relationship that will only grow closer and closer through the ages to come. Wouldn’t you like that, too?