A covenant can be simply defined as an agreement between two parties based upon promises made by either one or by both parties. There are two basic methods by which a covenant can operate. In the first, both parties to the covenant agree to the terms of the relationship and make mutual promises. This would be the case in a marriage, business merger, or even the purchase of property. In the second category, one party initiates the covenant by stipulating both the promises and the nonnegotiable terms, and the other party is invited to participate. Examples include payment of taxes or enrollment at an educational institution. In both instances, either party is free to withdraw from the covenant, but there is usually a consequence. (For instance, a person who fails to pay his mortgage will lose his home, or a citizen who refuses to remit taxes will be prosecuted.) 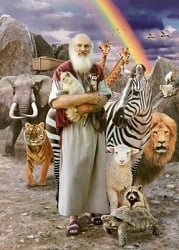 A covenant is usually sealed with at least one symbol. For instance, a person purchasing a home places several signatures on a mortgage agreement with a lending institution, which keeps the title deed for the property in trust until the full amount is paid. Or married people are issued a legal document of marriage by the state. The symbol itself is not the covenant but an indicator that a person is obligated to a covenant.

In Genesis 9:9 God covenants with creation that He will never again destroy the earth with water. Whenever a rainbow appears in the sky, all are expected to remember God’s promise. The same is true for the mark of circumcision, which was supposed to remind every Jewish male of His people’s role in blessing the nations. One covenant was made with all humanity, the other specifically with the nation of Israel. Also, in the covenant made with humanity after the Flood, the people didn’t have to do anything; the promise was just there, regardless of what the people did. This wasn’t so with the second one, the one made with Israel; the people had to fulfill their part of the deal.