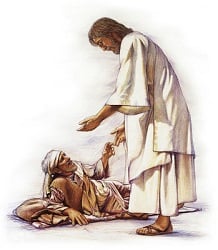 In antiquity, sickness was considered the result of sinful actions. (And even today, who hasn’t at times-even if only for a moment-wondered if illness, either their own or that of a loved one, wasn’t brought on as a punishment for sin?) In the book of Job, his friends suggested that his misfortunes, which included personal illness, resulted from hidden faults; the implication was that somehow his sinfulness caused his predicament. Similarly, Christ’s disciples understood blindness as punishment for someone’s sinfulness. This suggests that sickness required not diagnosis or medication but atonement. Matthew references Isaiah’s Messianic prophecy, stating that Christ fulfilled this prediction and that healing can be found in Him.

Various ancient pagan traditions included healing deities; none, however, proposed that gods actually took the infirmities upon themselves. Isaiah foretold a Redeemer who would assume our sicknesses and sinfulness. Other ancient traditions made provision for substitutionary atonement in order to benefit royalty. Substitutes were sacrificed in the king’s place in order to satisfy divine designs against a king, thus transferring evil’s punishment from one individual to another. Nowhere, however, were there traditions of kings dying as substitutes for their subjects.

This, however, is exactly what Isaiah said, and what Matthew confirmed: heaven’s Royalty suffering human sicknesses. Interestingly enough, the word translated as griefs in Isaiah 53:4 comes from a Hebrew word that means, basically, sickness or disease.

Jesus recognized that His mission was both to preach deliverance and to heal the brokenhearted (Luke 4:17-19). He attracted many through the power that came from His love and character. Others followed Him because they admired His easily understood preaching. Still others became disciples because of how He treated the impoverished. Many, however, followed Christ because He had touched and healed their brokenness.

We all have our broken places. How can we learn to disciple others through sympathy in their own brokenness-a brokenness that we can understand so well because of our own?