Read Matthew 27:11-26. What are some of the deeper implications of the choice given to the people and the choice that they made?

It was Barabbas the murderer who was supposed to be crucified on the middle cross. The criminals on either side were possibly his associates. Barabbas was not a first name but a last one. 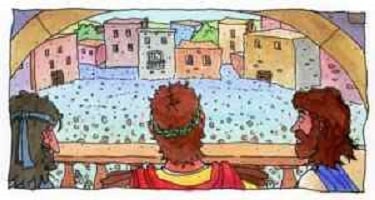 Talk about a farce!

“This man had claimed to be the Messiah. He claimed authority to establish a different order of things, to set the world right. Under satanic delusion he claimed that whatever he could obtain by theft and robbery was his own. He had done wonderful things through satanic agencies, he had gained a following among the people, and had excited sedition against the Roman government. Under cover of religious enthusiasm he was a hardened and desperate villain, bent on rebellion and cruelty. By giving the people a choice between this man and the innocent Saviour, Pilate thought to arouse them to a sense of justice. He hoped to gain their sympathy for Jesus in opposition to the priests and rulers.”—Ellen G. White, The Desire of Ages, p. 733.

Pilate was wrong. Unless under the conviction of the Holy Spirit, people will inevitably make the wrong spiritual choice, as did the mob here. In the end, we all have to choose between Christ or Barabbas, Christ or the fallen corrupted world, between life or death. “‘And this is the condemnation, that the light has come into the world, and men loved darkness rather than light, because their deeds were evil’” (John 3:19, NKJV).