↓
Home » Sunday: The Point at Issue

From the beginning, the church at Antioch consisted of both (Hellenistic) Jews and uncircumcised Gentiles (Acts 11:19-21, Gal. 2:11-13) who apparently lived in peaceful fellowship with each other. That fellowship, however, was shattered by the arrival of a group of believers from Jerusalem.

Read Acts 15:1-5. What was the problem the church was facing? 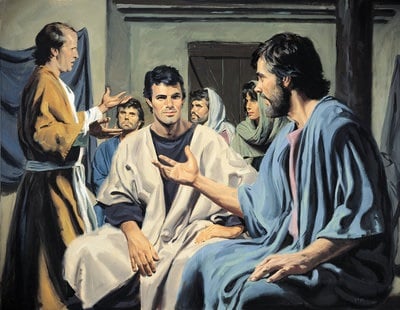 Traditionally called Judaizers, those individuals from Judea were possibly the same ones identified in verse 5 as believing Pharisees. The presence of Pharisees in the church should not surprise us, as Paul himself had been a Pharisee prior to his conversion (Phil. 3:5). This group seems to have gone to Antioch on their own initiative (Acts 15:24), though another episode that also took place in Antioch some time later shows that most Jews, including the apostles, were not very comfortable with the presence of uncircumcised Gentiles in the church (Gal. 2:11-13).

In his Epistle to the Galatians, Paul does not speak positively about the Judaizers, dubbing them as troublemakers (Gal. 1:7, Gal. 5:10, ESV) and “false brothers” (Gal. 2:4, ESV) whose real motive was to undermine the spiritual freedom of the gospel and bring the Gentile converts into the slavery of legalism.

Their point was rather simple: unless the Gentiles were circumcised and kept all the other Jewish ceremonial laws, they could not be saved. Salvation—so they believed—was to be found only within God’s covenant community and, according to the Old Testament, there was no other way to become part of God’s chosen people except through circumcision (Gen. 17:9-14, Exod. 12:48). In short, Gentiles could be saved only if they first became Jewish proselytes.

Paul and Barnabas, of course, could not agree with such requirements, which went against the very nature of the gospel. The aggressive approach of the Judean visitors, however, generated a heated discussion; the word in Acts 15:2 (stasis) has the sense of “conflict” or “dissension.” Yet, the matter was too important to be dealt with at the local level only. The unity of the church was at stake. The brethren of Antioch then decided to send a number of delegates to Jerusalem, including Paul and Barnabas, to find a solution.