I have published a couple of posts recently giving accounts of the history of the Bible and its translation, particularly for the English language. You can follow these links to read them if you wish:

A Short History of the King James Version

Transmission and Translation of the English Bible 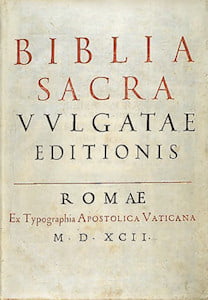 This discussion provides a brief history of when and how the Apocrypha came to be included in Scripture and was later rejected. This is followed by a table listing the Apocrypha book names and some notes about their content. Finally, the main reasons Protestants have rejected the Apocrypha from the biblical canon are summarised.

Apocrypha:  The books included in an intertestamental section of some Bibles. There are minor differences between the Apocrypha as included in the Eastern Orthodox, the Coptic, and the Vulgate/Douay-Rheims Bibles. The word comes from a Latin/Greek linguistic heritage meaning secret or obscure

Deuterocanonical: Term used to describe the Apocrypha mainly by Roman Catholics and literally means “belonging to the second canon.” In this discourse, it may be considered a synonym for Apocrypha

Apocryphal writings: This term includes but is not limited to the Apocrypha and is extended to include other writings written in the style of scripture. There is a large range of non-canonical writing covering both the Old and New Testament periods. Most of it is of doubtful origin and/or could be described as religious fiction. The “Apocrypha” is the name of a specific section of the Bible, whereas apocryphal is a generic descriptor.

Pseudepigrapha: Term applied to apocryphal works that have false attribution. In other words, they have been written by someone other than who they claim as the author.

The Hebrew Bible (Tanakh) canon was largely set in the time of Ezra or in the Hasmonean period (2nd Century BC) There is some evidence that some changes were made up until the time that the Masoretic text was standardized in the 9th Century. None of the Hebrew sources of the Old Testament contained the books of the Apocrypha.

On the other hand, the Septuagint (The Greek translation) of the Old Testament does contain the Apocrypha and forms the basis of what is included in the Biblical Apocrypha today.

It is generally accepted that the books included in the Apocrypha were written in the period from 200 BC to 100 AD. They were never considered as part of the Hebrew canon. While there was some debate among Hebrew scholars about the inclusion of some books (Jonah, Lamentations, Daniel) in the canon up until the development of the Masoretic text (7th-10th Centuries AD) the apocryphal books were never included, and there is no record of them being considered.

When Jerome was commissioned by Damasus to translate the Bible into Latin, he was faced with the issue of what should be included in the Vulgate. The books of the Apocrypha were in widespread use in the churches of the time, but he was of the opinion that while they were useful, they should not be part of the canon. Consequently, he included them in a separate section he called the Apocrypha. During his lifetime, most of these books were assimilated into the Old Testament. He added prefaces to the apocryphal books to the effect that they were for reading only and not to be used as the basis for doctrine.

Although the Vulgate was commonly used in churches from the 4th Century AD, it wasn’t until 1590 during the Council of Trent,  and in response to the Protestant challenge, that the Roman Catholic Church officially adopted the Vulgate including the Apocrypha as the authorised version of the Bible.

Luther did not accept the deuterocanonical books as equal to Scripture but commented that they were “useful and good to read.” Unlike other Bibles of his time, he followed the lead of Jerome by placing them in a separate section. Luther omitted some of the books from the Apocrypha as well. (Luther had some doubts about Hebrews, James, Jude and Revelation in the New Testament too. He did not put them in a separate section, but he did move them to the end of the New Testament – a place where they remain to this day.)

The King James Version followed the example of the Luther Bible and also the Geneva Bible, by including the Apocrypha as a separate section. All King James Bibles published prior to 1666 included the Apocrypha.  During the period of Puritan influence there as a move to remove the Apocrypha from the Bible, and after 1666 both versions of the King James Version were produced. It wasn’t until 1826 that a move was made by the British and Foreign Bible Society to not print the Apocrypha from the bibles they produced. Surprisingly, the reason for omitting it was based more on cost reduction, rather than canonicity.

What is in the Apocrypha?

This table lists the books that are typically included in the Apocrypha where the apocryphal writings are collected together in a separate section. In the King James Version from 1611 until 1666 they were part of the Old Testament, as they are in the Douay-Rheims version. Note that Daniel and Esther are included in this list because they included significant apocryphal additions in the Vulgate and Douay-Rheims versions

Protestants consider the Apocrypha to be non-canonical and list a number of reasons for that decision. These include but are not limited to:

In summary, there is a general recognition that the books of the Apocrypha are not the same calibre as Scripture. That does not mean that they are wrong. There are passages that are quite uplifting.

Should we read the Apocrypha? The answer to that question depends on your attitude to study. Some of the books are definitely informative. In particular, the Maccabees books give an historical account of Antiochus Epiphanes and the Maccabee uprising which is interesting to us for two reasons. Firstly, some churches see the Antiochus period as the fulfilment of some of Daniel’s prophecies. If you are interested in understanding their point of view and why we reject it, it is worth reading the source material that this view is based on, rather than simply accepting its rejection second hand, Secondly, the Maccabean period set the scene for Palestine during the time of Christ and in that respect provides useful background material.