↓
Home » Allowing for God to Use Humor and Figures of Speech

As we are studying this week about how to deal with difficult texts I think one solution is to allow for the possibility that God was using what we call a “figure of speech,” which is when a word or phrase is used in a non-literal sense for rhetorical or vivid effect. Maybe even allow for God to use a little irony or sarcasm at times? I want to be careful how I make this next comment. It is good for us to study and diligently search the Scriptures instead of just casually reading them. At the same time I think we sometimes make mistakes by being a little too intense in interpreting Scripture. Does that make sense? Here is an example of where some people in Jesus’ day were a little too intense with something He told Peter.

See what I mean? The people took Jesus’ expression “If I want him to remain alive until I return, what is that to you?” to mean way more than Jesus intended. They were way too intense about a simple expression Jesus made. While searching and studying Scripture, we need to be careful to not let our imagination get the best of us to where we see things that simply are not there. My mother used to say she thought some people would get off-track theologically (especially those trying to destroy the sanctuary message) by making some things more complicated than they really were. I see a lot of wisdom in her words.

Another example of needing to allow God to use figure of speech and even sarcasm comes in a story in 1 Kings where Ahab had a history of not listening to God’s prophets and only wanting to hear from false or true prophets whatever it was he wanted to hear. In 1 Kings 22:15 Ahab asks one of God’s prophets if he should go to battle.

So he came to the king. And the king said unto him, Micaiah, shall we go against Ramothgilead to battle, or shall we forbear? And he answered him, Go, and prosper: for the Lord shall deliver it into the hand of the king. 1 Kings 22;15 KJV

God’s prophet Micaiah tells Ahab to go ahead and go prosper. But later Ahab suffers a terrible defeat and is killed in the battle. Did Micaiah lie? I don’t think so. I think he was being sarcastic because he knew how Ahab only wanted to hear what he wanted to hear. The NLT makes it clear.

When Micaiah arrived before the king, Ahab asked him, “Micaiah, should we go to war against Ramoth-gilead, or should we hold back?” Micaiah replied sarcastically, “Yes, go up and be victorious, for the Lord will give the king victory!” 1 Kings 22:15 NLT

I believe Jesus is using irony in Luke 8.

He replied, “You are permitted to understand the secrets of the Kingdom of God. But I use parables to teach the others so that the Scriptures might be fulfilled: ‘When they look, they won’t really see. When they hear, they won’t understand.’ Luke 8:10 NLT

Jesus is referring to a phrase in Isaiah 6:9 where He tells the people to not understand. Did Jesus really want the people to not understand? Of course not. He was being sarcastic. Like a teacher saying, “heaven forbid my students actually read this lesson and get a passing grade” the teacher is only being sarcastic because she knows her students aren’t going to read the lesson.

John 7 gives us another example of where people are too intense with Jesus’ words.

You go on. I’m not going to this festival, because my time has not yet come.” John 7:8 NLT

I actually had a Facebook friend use this verse to expose the lies of the New Living Translation. He told us this verse makes Jesus look like a liar because later He does indeed go to the festival. My friend shared how the New King James Version got it right.

My friend said the NKJV was correct because it uses the word “yet” therefore not making Jesus look like a liar since He later goes to the feast. Only one problem. Do you see the little “b” next to the word “yet”? That footnote tells us the word “yet” was not in the original manuscript. The NLT actually is more accurate with this verse than the KJV or NKJV.  Obviously Jesus was not trying to mislead anyone about Him going to the festival. Did Jesus have a right to change His mind? Sure, though I doubt that was the case. He did not go up with his brothers, and that is all He was saying. My Facebook friend was being way too intense with this passage and in doing so claimed some versions were making Jesus out to be a liar when in reality my friend needed to just not be so intense with Jesus’ words. 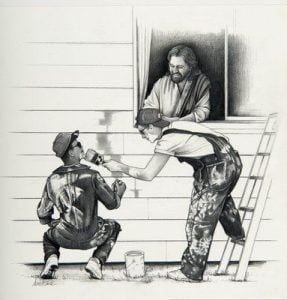 Jesus had a personality. He was not a drab and dreary individual. Some try to rob Jesus of His personality and even humorous personality by being way too intense with His words at times. I imagine when Jesus told the disciples that they were worth more than a whole flock of sparrows that there must have been a chuckle in His voice as He probably even laughed at the comparison. In Luke 24 Jesus calls the young men he met on the road “fools” for not knowing He would be resurrected. Do you think there was anger in His voice when He called them fools? I don’t believe so. In Matthew 5:22 Jesus says those who use the word “fool” in anger will be in danger of hell fire. Jesus would never contradict His own words. I can see Jesus telling these disappointed disciples with a big smile on His face and joy in his voice, “You fools! Have I got some good news for you!” Likewise when Jesus told the woman begging for His help that He was only sent to help the sheep of Israel. I can see a twinkle in His eye as He told her that, as He really just wanted to see what His disciple’s reaction would be.