Critics of Christianity will often argue that Jesus knew beforehand that, though He would die, He would be resurrected to life. Thus, they ask, what was the big deal about His death when He knew it would be only temporary? 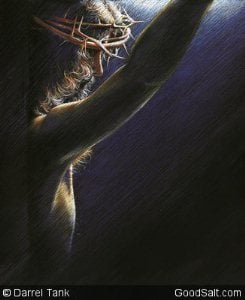 Jesus on the Cross Image © Darrel Tank from GoodSalt.com

My mother knows that flying in an airplane is safer than traveling by car. She knows the sad statistics that people are killed every day on the highways, while a rare jet crash makes headlines around the world. Knowing all this, when my mother gets on an airplane she sure does not feel that it is safer! There is a difference between knowing and feeling. Jesus died as a man, not as God.

As a man, this is what Jesus experienced;

“In that thick darkness God’s presence was hidden. He makes darkness His pavilion, and conceals His glory from human eyes. God and His holy angels were beside the cross. The Father was with His Son. Yet His presence was not revealed. Had His glory flashed forth from the cloud, every human beholder would have been destroyed. And in that dreadful hour Christ was not to be comforted with the Father’s presence. He trod the wine press alone, and of the people there was none with Him.”-Ellen G. White, The Desire of Ages, pp. 753, 754.

“The Saviour could not see through the portals of the tomb. Hope did not present to Him His coming forth from the grave a conqueror, or tell Him of the Father’s acceptance of the sacrifice. He feared that sin was so offensive to God that Their separation was to be eternal. Christ felt the anguish which the sinner will feel when mercy shall no longer plead for the guilty race. It was the sense of sin, bringing the Father’s wrath upon Him as man’s substitute, that made the cup He drank so bitter, and broke the heart of the Son of God.” -Ellen White, Desire of Ages, p. 753.

It is because John Huss died a totally different death than Jesus died. John knew he would be resurrected. He knew he was at peace with the Father. But on the cross Jesus was being treated the way we deserve to be treated so we can be treated the way He deserves to be treated. Think about this, Jesus always called God His Father.

“In my Father’s house are many mansions.”
“I always do those things that please my Father.”
“I and my Father are one.”

But when Jesus was on the cross being treated the way we deserve to be treated He could not call God His Father! He did not know that He would be resurrected. Instead He cried out, “My God! Why have you forsaken me?” This fulfilled the prophecy of Psalms 22 of Jesus dying the second death.

Jesus was not crying out, “Why have you forsaken me till Sunday morning?” You don’t forsake someone when you leave them for the weekend. When I tell my Sabbath School class I will be preaching at another church next Sabbath, none of them ask me why I have forsaken them. They know I will be back the following week. When Jesus cried out, “Why have you forsaken me?” He felt abandoned forever. He felt what the wicked will feel.

Obadiah 1:16 says the wicked will be as though they had never been. Jesus was not facing a mere six-hour pain endurance marathon. A lot of cancer patients would gladly trade their years of battling cancer for six hours on a cross. The physical pain is not what made it the supreme sacrifice. What Jesus was facing was going into total oblivion and being as though He had never existed! While Satan was willing to sacrifice anyone who got in his way of being number 1, Jesus was willing to go into total oblivion if He could just save even one of us.

Hebrews 2:9 tells us Jesus tasted death for everyone. Jesus and Paul both refer to the first death as sleep. Jesus did not save us from that death, as we plainly experience that death ourselves. Paul did not say Jesus tasted sleep for every man. No, He tasted death, the death of the wicked. Yes, He prophesied of His own resurrection, but that was while He still felt the presence of His Father. When Jesus felt the Father turn His back on Him, He felt, as a man, that the promise of the resurrection had left with the Father. Jesus became the God-forsaken God.

Some have a hard time wrapping their minds around this awesome love. Some refuse to believe that Jesus would be willing to die forever to save us. In that case they have made Moses more loving than Jesus. In Exodus 32:32 Moses is willing to be wiped out of eternity in order to save the children of Israel. Do you think Moses loved them more than Jesus loves sinners? Of course not! Only when Moses experienced the self-sacrificing love of God could he express such love. If you don’t believe that Jesus was willing to say good-bye to life forever in order to save us, then you believe that Moses demonstrated more love than Jesus.

Since the Jews were accusing Jesus of blasphemy they could have just stoned Him to death. According to Leviticus 24:16, blasphemers were to be stoned and not crucified. Yet Jesus was crucified. Why? Because Deuteronomy 21:22-23 tells us those who are hung are cursed by God. Someone could plead for mercy and have the hope of salvation, just like John Huss had, even though they were stoned to death. However, being hung was a sign you were cursed by God. Joshua 10 tells the story of five kings who refused to accept Israel’s God and were hung from five trees, telling the world they had rejected God and so there was no salvation for them. It was good-bye to life forever.

There is nothing I would rather be preaching than this message here. It is the everlasting gospel in the three angels’ messages. This kind of love changes everything. It changes how we look at the cross and how we look at sin. Most of all it changes our hearts. The disciples were just a bunch of self-ambitious men until they saw this love displayed on the cross. After they saw this love they were willing to give everything – even their own lives. Revelation 15 tells us there will be a multitude singing the song of Moses and the Lamb. They will be filled with this self-sacrificing love just like Moses and Jesus. They will hate sin more than they hate death and they will love God more than they will love their own lives or self preservation.

Jesus’ love for you goes deeper than the nail scars. He loves you more than He loves life itself. He was willing to go into total oblivion and be as though He had never existed if that is what it took to save you!