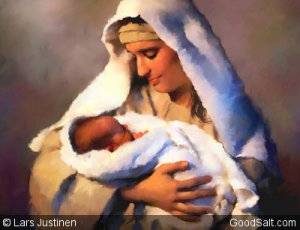 from the start that we do not know the day on which our Lord was born. His early biographers did not think it of sufficient importance to record. 1

Winter is the season of despair. It is the time when darkness creeps over the earth, when hunger huddles around a dying fire, when sorrows rise and spirits fall. This is less evident today than long ago; today we can summon light at our will by flicking a switch, and bring food from the warm summer on the far side of Earth. But even today, depression is more common in the winter, and accidents more frequent. Winter is the time when all the world seems harsh and hostile.

It was at just such a time that the Lord entered this world. The land in which he was born lay exhausted under the iron hand of empire. A bloody tyrant sat on the throne in Jerusalem, and beyond Herod was the terrible strength of Caesar, master of the world. The priests of that time, even in the chronicles of their own people, are not remembered favorably for learning or compassion. A winter of despair lay over the world.

But amid that winter, the Sun of righteousness rose up to reveal Himself, and the world was changed forever.

For God became a human. That is a stunning thing, when you consider it. The Omnipotent surrendering omnipotence, the Monarch subjecting himself to his own subjects, the All-Powerful making himself powerless, the Maker of the Universe consenting to be bound by the same laws He Himself had made. God would not require of His people anything that He did not also require of Himself. He faced the same tests and dangers that they did, with no strength or support that they did not have.

And in so doing, He showed them who He was, and what moved him. Not power; he had renounced it. Not strength; he had not enough to lift His infant head. No; He came so that He might love us, and show his love. And this is the thing we celebrate this season, when all the world is bleak and love seems far away.

We might celebrate the power of the first words God is recorded to have said: “Let there be light!” We have seen that light ourselves: the first light of Creation still shining between the stars. We might (and do) celebrate the Resurrection, when God showed his strength triumphant even over death, and proved that no power and no law could prevent Him from claiming His own, forever. We might celebrate the sure assurance that the One who left us will return to us, and in His second coming perfect all things.

We might, but then again without his birth, we might not. For if God had not come to us, could we ever have come to Him? Would we even have wanted to, if we knew nothing but that He was the Maker and Ruler of all things? We might have come out of fear, or in trembling obedience, but we would not have come in hope or joy or eager expectation.

But we come, in love and faith. We are not afraid of the child lying in the manger, or of the boy who grew up in a little village, or of the man who walked and talked in the highways of Galilee and the courts of Jerusalem. When we hear the birth-cry of the Universe, when we look upon the empty tomb, when we shall see the heavens opened and the Son of God descending — we say, and will say again: “We know the One who does this. We know You. Take us to Yourself.”

Because He became one of us, we can know Him. Because we know Him, we can love Him.

That is what we celebrate this season. In the words of the hymn:

Peace and love to all.
Tony Zbaraschuk