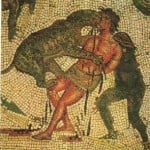 “In fact, everyone who wants to live a godly life in Christ Jesus will be persecuted” 2 Timothy 3:12, NIV

When I awake each morning, I can enter my den and open my Bible for morning Bible study with nary a thought that anything should prevent me from enjoying this time in the Word. I can also pray for my needs and the needs of others before an open window where the morning breezes may carry my words to heavenly ears. I have no fear that someone may be lurking below my window attempting to catch me in this act of devotion. But it was not this way for the apostolic church and their spiritual progeny. Persecution was often not only possible but likely. So likely, in fact, that Paul wrote the above statement to Timothy. He was Paul’s sometime traveling companion and eventual Bishop of Ephesus. That Paul and Timothy with many, many others eventually were martyred for their faith only adds emphasis to Paul’s statement regarding persecution.

This was the church of the 1st century, the church Paul largely shaped with his preaching and his liberal theology of grace and inclusiveness. It was a church militant faced with battle against “spiritual wickedness in high places.” (See Ephesians 6:12) Although the battle was spiritual, the casualties were typically corporeal. Today, we bemoan the virtualization of violence through the special effects of movies and video games. In Paul’s day, such images were not virtual. They were easily seen by everyone in the local amphitheater or even in the streets as those in power would suddenly and violently rip the life from the bodies of those who were unable to resist them. In spite of the threat of immediate unexpected violence and death from those who saw change as a threat to power, many chose to place themselves and their families at risk by choosing adherence to a strange new cult worshipping a dead man whom they claimed had risen from his tomb. That people would believe this merely on the say so of another person without seeing it for themselves and no physical proof was incredible enough. That they would willingly give their lives for their faith in this story made it the most powerful story ever told.

Perhaps this is what made Paul’s testimony so powerful. He was not a silken-robed orator who only spoke theoretically of spiritual ephemera. No, his clothes were sometimes soaked with his own blood. The blood he willingly shed to be able to tell the story of Jesus and His death was potent witness to the strength of his conviction about this man who had died as a criminal on a Roman cross. If he only spoke esoterically about these things without the further testimony of his wounds, why would anyone be motivated to seal their own witness with martyrdom when simply going with the prevailing paradigm would be so much easier and profitable? No matter what one thought of his words, the wounds Paul suffered resonated with the wounds Christ bore on the cross. Perhaps this is why Paul wrote to the Galatian church, “From now on, let no one cause me trouble, for I bear on my body the marks of Jesus.” Galatians 6:17, NIV

Some have interpreted this to mean that Paul actually bore the “stigmata” or the scars from the nails that fastened Jesus to the cross. From this idea a whole mythology of those who are specially favored being granted the scars of the “stigmata” has arisen. However, it may be more correct to understand Paul as simply referring to the fact that he shared physically in Christ’s suffering through the wounds that were inflicted on him as he witnessed for Jesus while traveling through many of the provinces of the Roman Empire. His physical trials were extensive. When faced with challenges to his evangelizing by those who had not sealed their witness with their blood as he had, he wrote, “Are they servants of Christ? (I am out of my mind to talk like this.) I am more. I have worked much harder, been in prison more frequently, been flogged more severely, and been exposed to death again and again. Five times I received from the Jews the forty lashes minus one. Three times I was beaten with rods, once I was pelted with stones, three times I was shipwrecked, I spent a night and a day in the open sea, I have been constantly on the move. I have been in danger from rivers, in danger from bandits, in danger from my fellow Jews, in danger from Gentiles; in danger in the city, in danger in the country, in danger at sea; and in danger from false believers. I have labored and toiled and have often gone without sleep; I have known hunger and thirst and have often gone without food; I have been cold and naked.” 2 Corinthians 11:23-27, NIV

Perhaps this is why God called Saul, who became Paul, on the road to Damascus. He could see in Paul a willingness to endure great suffering for what he committed his heart to. The same zeal that caused him to persecute the early church vehemently would also energize him to advance the gospel in the face of relentless opposition. Because Paul had this determination, God could build an evangelistic church that could survive, even if only barely at times, the onslaught that was destined to come. The Bible calls this onslaught a flood of evil, straight from the mouth of Satan. (See Revelation 12:15) But this church could not survive on mere theories about faith. God had to build on the foundation of Paul’s determination an edifice of suffering that would bear adequate witness to the power of the gospel. As Christ’s death on the cross eloquently spoke of the love of a God who would suffer and die so for enemies and strangers, so the suffering and martyrdom of the early church echoed that love with their blood.

In modern societies where there is little price to pay for publicly proclaiming one’s faith, the testimony of the death and resurrection of Jesus can be weakened into simply another story. In western capitalist societies especially, the value of everything is determined by its cost. A faith that costs nothing is given its fair value in the public marketplace of ideas – nothing. It is in the cost of our faith that the relationships of eternity are forged. A relationship that is formed based on what one has suffered to build it, is a relationship not easily broken. Paul knew that his suffering was building forever relationships, forever friendships, between him and those he reached out to. He went so far as to express the sacrificial foundations of this kind of relationship by writing to the Galatians, “I bear you record, that, if it had been possible, ye would have plucked out your own eyes, and have given them to me.” Galatians 4:15, NIV While he may have been speaking figuratively, the underlying principle is clear. Forever friendship is not defined by what we can obtain from the relationship, but by how much we are willing to suffer to keep the relationship unbroken.

Paul, in his letter to the Philippians said “In your relationships with one another, have the same mindset as Christ Jesus.” Philippians 2:5, NIV He wrote this in the context of not seeking our own advantage but rather enduring less for ourselves to build up others. In the same way Christ gave Himself on the cross to lift us from the pits of sin and death to the higher hope of salvation and eternal relationship with Him and all those who would suffer for the sake of the hope of others in order to bring them to Jesus.

While Paul wrote to Timothy that every Christian will suffer persecution, not every persecution is proof of a relationship with Jesus. Sometimes suffering is indicative not of how close we are to Christ but rather how far away we are from Him. When we suffer like that we are suffering for our evil deeds rather than for our Christian love for God and our fellow man. Peter wrote about this. He said, “But how is it to your credit if you receive a beating for doing wrong and endure it? But if you suffer for doing good and you endure it, this is commendable before God. To this you were called, because Christ suffered for you, leaving you an example, that you should follow in his steps.” 1 Peter 2:20-21, NIV

If we wish to have a friendship with Jesus Christ that will last for eternity, we must seek to create those eternal friendships with one another. We must demonstrate our willingness to have this relationship through our commitment to lose what is necessary to introduce others to Jesus just as Paul suffered loss in apostolic times. We can bring about a Spirit-filled apostolic revival in our day, or we can choose the path of comfort and ease. We can come to Jesus to participate in His loving sacrifice, or we can be like a certain young man who instead of sacrifice chose to turn away from Jesus. “…he went away sad, because he had great wealth.” Matthew 19:22, NIV

Some might say, “I would give up everything for Jesus.” But for far too many it is like the man who, enamored by the wonderful music he had just heard, told a concert pianist that he wished he could play the piano like that. The pianist replied, “No you don’t, or you would.”