Following wisdom’s appeal, the inspired author of Proverbs 9 urges his audience to make a choice now between two lifestyles: wisdom or folly. The first and last six verses (Prov. 9:1–6, Prov. 9:13–18) are symmetrical and bring out the contrast between the opposite camps. 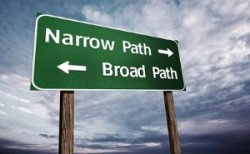 Compare Proverbs 9:1–6 and Proverbs 9:13–18. What is the difference between wisdom and folly?

1. Wisdom is efficient and is involved in Creation: seven verbs are used to describe her actions there (Proverbs 9:1-3). The seven pillars she has hewn (Proverbs 9:1) allude to the seven days of Creation. Folly, in contrast, sits and does nothing, just pretending to be someone when in factshe is simple, and knows nothing (Proverbs 9:13, NKJV).

2. Although wisdom and folly call the same audience (note the identical Proverbs 9:4, Prov. 9:16), what they provide is essentially different. Wisdom invites her guests to eat the bread and drink the drink that she has prepared (Proverbs 9:5). Folly offers nothing to eat or drink; she simply boasts about stolen provisions (Proverbs 9:17).

3. Wisdom calls us to forsake foolishness and, therefore, to live. Folly is more tolerant; she does not demand that we forsake anything, but the result is death. Those who follow wisdom will be advancing; they will go in the way of understanding (Proverbs 9:6, NKJV). Those who follow folly will be static, and they will not know (Proverbs 9:18, NKJV).

The key to wisdom is humility. The wise man is the man who is teachable and responds to instruction with an open mind. Wisdom comes only to the one who, like a child, feels the need to grow. This is why, in the most explicit manner, Jesus taught that unless you . . . become as little children, you will by no means enter the kingdom of heaven (Matt. 18:3, NKJV).