Paul bestows his blessing on those who, he says, “follow this rule” (Gal. 6:16, NIV, NRSV) . Given the context, what “rule” do you think Paul is talking about? 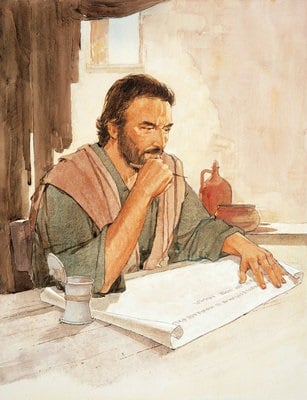 The word translated “rule” literally refers to a straight rod or bar used by masons or carpenters for measuring. The word eventually took on a figurative meaning referring to the rules or standards by which a person evaluates something. For example, when people talk about the New Testament canon, they are referring to the twenty-seven books in the New Testament, which are seen as authoritative for determining both the belief and practice of the church. Therefore, if a teaching does not “measure up” to what is found in these books, it is not accepted.

The word mark comes from the Greek word stigmata, from which the English word stigma also is derived. Paul may be referring to the common practice of the branding of slaves with the insignia of their master as a form of identification, or to the practice in some mystery religions where a devotee branded himself or herself as a sign of devotion. In any case, “by ‘the marks of the Lord Jesus’ Paul doubtless refers to the scars left upon his body by persecution and hardship (see 2 Cor. 4:10, 2 Cor. 11:24-27) . His opponents now insist on compelling his Gentile converts to accept the mark of circumcision as a token of their submission to Judaism. But Paul has marks that indicate whose slave he has become, and for him there is no other loyalty than to Christ. . . . The scars Paul had received from his enemies while in the service of his Master spoke most eloquently of his devotion to Christ.” — The SDA Bible Commentary, vol. 6, p. 989.