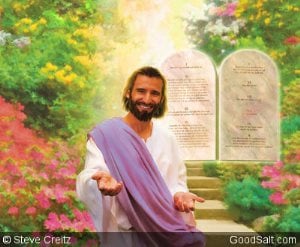 Many have seen the contrast between Paul’s negative comments about “doing the whole law” and his positive assertions about “fulfilling the whole law” as paradoxical. They really aren’t. The solution lies in the fact that Paul intentionally uses each phrase to make an important distinction between two different ways of defining Christian behavior in relation to the law. For example, it is significant that when Paul refers positively to Christian observance of the law he never describes it as “doing the law.” He reserves that phrase to refer solely to the misguided behavior of those who are living under the law and are trying to earn God’s approval by “doing” what the law commands.

This is not to imply that those who have found salvation in Christ do not obey. Nothing could be further from the truth. Paul says they “fulfill” the law. He means that true Christian behavior is much more than the outward obedience of just “doing” the law; it “fulfills” the law. Paul uses the word fulfill because it goes far beyond just “doing.” This type of obedience is rooted in Jesus (see Matt. 5:17). It is not an abandonment of the law, nor a reduction of the law only to love, but it is the way through which the believer could experience the true intent and meaning of the whole law!

Although it is a quotation from Leviticus, Paul’s statement in Galatians is ultimately rooted in Jesus’ use of Leviticus 19:18. Jesus, however, was not the only Jewish teacher to refer to Leviticus 19:18 as a summary of the whole law. Rabbi Hillel, who lived about a generation before Jesus, said, “What is hateful to you, do not do to your neighbor; that is the whole law.” But Jesus’ perspective radically was different (Matt. 7:12). Not only is it more positive, but it also demonstrates that law and love are not incompatible. Without love, the law is empty and cold; without law, love has no direction.