In this story, Jacob — who deceived his father and his brother to acquire the birthright, and who stole the blessing that Isaac designed to give to his elder son — nevertheless remained passive toward Laban and served him faithfully. Jacob knows well that he has been deceived by his father-in-law, and yet, he let it go. It is difficult to understand Jacob’s passivity considering his temperament. Jacob could have revolted, or at least resisted Laban or bargained with him. But he didn’t. He just did what Laban had asked, no matter how unfair it all was. 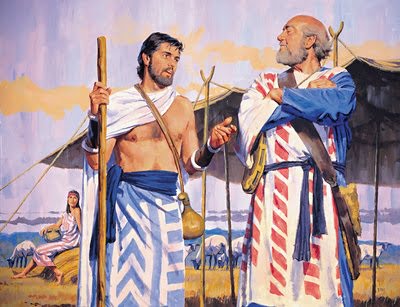 Nevertheless, at the birth of Rachel’s first son Joseph, Jacob finally reached the fourteenth year of his “service” to Laban (Genesis 30:26), and now considers leaving Laban in order to return to the Promised Land. But Jacob is concerned about providing for his “own house” (Genesis 30:30).

Read Genesis 30:25-32. What is happening here, and what kind of reasoning does Jacob use? What is Laban’s response?

It had been a very long detour for Jacob, who had long been gone from home. It probably had not been his original intention to stay away from his country for so long, but events kept him away for years. It’s now time to return home, and what a family he will return with too.

Meanwhile, Jacob’s unnatural compliance suggests that Jacob has perhaps changed; he has understood the lesson of faith. That is, Jacob waited for God’s signal to go. It is only when God speaks to him that Jacob decides to move.

What helped him see that it was time to go, too, was the attitude of Laban’s sons and Laban himself (see Genesis 31:1-2). “Jacob would have left his crafty kinsman long before but for the fear of encountering Esau. Now he felt that he was in danger from the sons of Laban, who, looking upon his wealth as their own, might endeavor to secure it by violence.” — Ellen G. White, Patriarchs and Prophets, p. 193.

Hence, he took his family and possessions and left, thus beginning another phase in the great saga of God’s covenant people.