↓
Home→Daily→Thursday: Jesus and the Essence of the Law

Read Matthew 19:16-22. From the immediate details of this specific story, what broad and important truths can we derive from this account about the law and what keeping of the law entails? 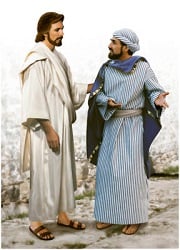 The rich young man couldn’t comprehend that salvation from sin does not come from following the law, even strictly. It comes, rather, from the Lawgiver, the Savior. The Israelites had known this truth since the beginning, but they had forgotten it. Now Jesus set forth what they should have heeded from the start: that obedience and full surrender to God are so united that one without the other becomes only a pretense of Christian life. Nothing short of obedience can be accepted. Self-surrender is the substance of the teachings of Christ. Often it is presented and enjoined in language that seems authoritative, because there is no other way to save man than to cut away those things which, if entertained, will demoralize the whole being. — Ellen G. White, The Desire of Ages, p. 523.

In another encounter, the Sadducees had been questioning Christ about the resurrection, and Jesus had astonished and silenced them with His answer. So, now the Pharisees gathered together, ready to make a final attempt to lead the Savior into saying something that they could interpret as being against the law. They chose a certain lawyer to question Jesus about which was the most important commandment (Matt. 22:35-40). The lawyer’s question probably arose from by the attempt of the rabbis to arrange all the commandments by order of importance. If two commands appeared to be in conflict, the one assumed to be more important took priority and left a person free to violate the less important one. The Pharisees particularly exalted the first four precepts of the Decalogue as being more important than the last six and, as a result, they failed when it came to matters of practical religion.

Jesus answered in a masterful way: first, and most important, there must be love in the heart before anyone can begin to observe God’s law. Obedience without love is impossible and worthless. However, where there is true love toward God, a person will unconditionally put his life in harmony with God’s will as expressed in all ten of His commandments. That is why Jesus later said: If you love Me, keep My commandments (John 14:15, NKJV).