The Israelites pledged to take care of the temple. Even though they were a small group financially oppressed by the kings, they decided they needed to give from the little they had in order for the temple to thrive and not just survive. Therefore, they chose to give a third of a shekel for the temple service every year, instead of just when the census happened, as the law commanded. 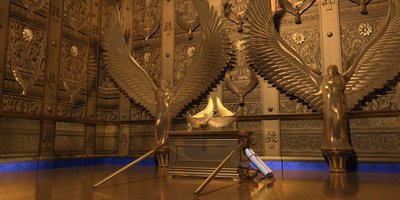 The nation saw a need to go beyond what was required. Additionally, they allotted the responsibility for burning firewood on the altar to specific families, as they recognized that without organization the practice would wane.

Firstfruits, firstborns, and tithes and offerings were aspects of the temple service that provided for the ministry of the priests and Levites. A tenth of everything was to go to the Levites. Also, firstborns were redeemed by money, adding to the amount the Levites received. However, a tenth of the Levites’ tenth went to the priests.

The temple served as the heartbeat of the Israelite nation. It was so central to their faith that the greatest tragedy occurred when Nebuchadnezzar tore down the temple and carried away the sacred objects.

When the temple was properly managed, it gave the nation a vibrant spiritual life because it pointed the people to the ultimate solution to the sin problem, which was through the death of a lamb. When Jesus died on the cross, that solution was provided (Rom. 5:5-10). Moreover, through the yearly service of the Day of Atonement, the people learned that ultimately God has a plan to get rid of evil and sin for good. In other words, the temple served as the setting for revealing to the people the entire plan of salvation. The lessons we can gain through looking at the temple services are immense and necessary to give us a bigger picture of God’s character and to illuminate the plan of salvation.