The sincerest offering of praise is imitation. Christ’s earliest disciples imitated their Master’s prayer life. Naturally they prayed for personal safety, for their daily necessities, and for individual spiritual guidance. Nevertheless, intercessory prayer became an important component of their discipleship. 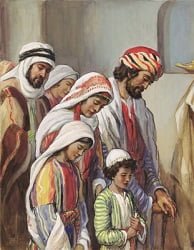 Constant prayer anchored the early church. Whenever Paul departed for missionary purposes, he was commissioned through prayer (Acts 13:3, Acts 14:23). Even their farewells were clothed in prayer (Acts 20:36, Acts 21:5). Frequently their prayers assumed the form of intercession. They prayed for government leaders, fellow believers, and, generally speaking, everyone! Paul interceded for the father of Publius, the chief official who suffered from dysentery. Even when he lay dying Stephen interceded for his murderers. The centrality of prayer among the earliest believers can hardly be overstated. Scripture says that prayer pleases God because He desires salvation for everyone and seeks the advancement of truth. Through prayer-combined with apostolic teaching, fervent preaching, miraculous wonders, and loving fellowship-the early church rapidly multiplied. Despite vigorous persecution, Christianity enveloped the empire. Thousands upon thousands accepted the gospel. Transformed lives burned as living lights from Caesar’s palace to points unknown.