↓
Home » Tuesday: The Angel With an Open Book

The sixth trumpet brings us to the time of the end. What are God’s people called to do during this time? Before the seventh trumpet sounds, an interlude is inserted, explaining the task and experience of God’s people at the end time.

Read Revelation 10:1-4. What is happening here?

“The mighty angel who instructed John was no less a personage than Jesus Christ”. – Ellen G. White Comments, The SDA Bible Commentary, vol. 7, p. 971. He places His feet on the sea and the land, signifying His universal rule and that what He is about to proclaim has worldwide significance. He shouts with the roar of a lion. A lion’s roar symbolizes God’s voice (see Hos. 11:10, Rev. 5:5).

John is not allowed to write down what the thunders have said. There are things concerning the future that God has not revealed to us through John. 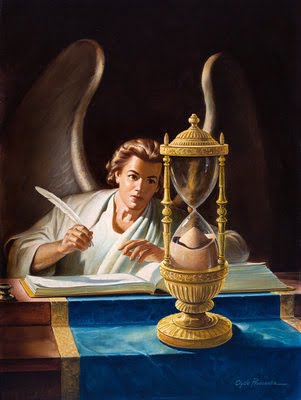 The statement that time will be no longer refers to the time prophecies of Daniel, particularly the 2,300 prophetic days of Daniel 8:14 (457 B.C.—A.D. 1844). After this period, there will no longer be prophetic time periods. Ellen White states: “This time, which the angel declares with a solemn oath, is … prophetic time, which should precede the advent of our Lord. That is, the people will not have another message upon definite time. After this period of time, reaching from 1842 to 1844, there can be no definite tracing of the prophetic time. The longest reckoning reaches to the autumn of 1844”. – Ellen G. White Comments, The SDA Bible Commentary, vol. 7, p. 971.