↓
Home→Daily→Tuesday: Hope in the Second Coming

Read the following texts, and note what is said about future events:

1 Pet. 1:4 To an inheritance incorruptible, and undefiled, and that fadeth not away, reserved in heaven for you,

1 Pet. 1:17 And if ye call on the Father, who without respect of persons judgeth according to every man’s work, pass the time of your sojourning here in fear:

1 Pet. 4:5-6 Who shall give account to him that is ready to judge the quick and the dead. For for this cause was the gospel preached also to them that are dead, that they might be judged according to men in the flesh, but live according to God in the spirit.

1 Pet. 4:17 For the time is come that judgment must begin at the house of God: and if it first begin at us, what shall the end be of them that obey not the gospel of God?

2 Pet. 3:1-10 This second epistle, beloved, I now write unto you; in both which I stir up your pure minds by way of remembrance: That ye may be mindful of the words which were spoken before by the holy prophets, and of the commandment of us the apostles of the Lord and Saviour: Knowing this first, that there shall come in the last days scoffers, walking after their own lusts, And saying, Where is the promise of his coming? for since the fathers fell asleep, all things continue as they were from the beginning of the creation. For this they willingly are ignorant of, that by the word of God the heavens were of old, and the earth standing out of the water and in the water: Whereby the world that then was, being overflowed with water, perished: But the heavens and the earth, which are now, by the same word are kept in store, reserved unto fire against the day of judgment and perdition of ungodly men. But, beloved, be not ignorant of this one thing, that one day is with the Lord as a thousand years, and a thousand years as one day. The Lord is not slack concerning his promise, as some men count slackness; but is longsuffering to us-ward, not willing that any should perish, but that all should come to repentance. But the day of the Lord will come as a thief in the night; in the which the heavens shall pass away with a great noise, and the elements shall melt with fervent heat, the earth also and the works that are therein shall be burned up. 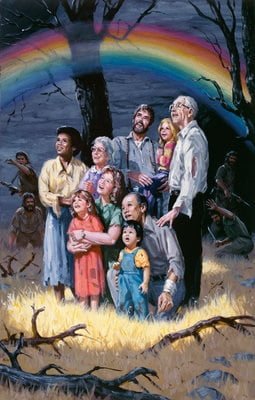 One of the crucial issues facing those who first read and heard 1 Peter was persecution. Peter comforts his readers with the thought that, even though their lives may be hampered by persecution, there is a future reward waiting for them in heaven, a reward that cannot be taken away. Very early in 1 Peter, he mentions that Christians have an imperishable inheritance kept in heaven for them (1 Pet. 1:4).

Peter highlights two things that will take place in the future: the last judgment and the fiery destruction of evil. In other words, he shows that although there is persecution now, justice and judgment will be done, and believers will receive their eternal reward.

Peter also emphasizes that “the godless” will be destroyed in a worldwide firestorm (2 Pet. 3:7).

Peter spends some time dealing with problems that arose about whether or not Jesus is indeed coming back (2 Pet. 3:1-10). He points out that the “delay” of Jesus’ second coming is to allow more people to repent and be saved. He also points out that the certainty of a future reckoning should convince everyone to live a holy and blameless life.

Thus, however focused Peter is on the here and now and on practical Christian living, he still keeps before his readers the future hope that awaits them. In short, whatever the circumstances at the moment, they need to press on ahead in faith and obedience.