Jacob could not easily allow the departure of Benjamin, his only son with Rachel who remained with him. He was afraid that he would lose him, as he already had lost Joseph (Genesis 43:6-8). It is only when there was no more food (Genesis 43:2) and when Judah pledged to guarantee the return of Benjamin (Genesis 43:9) that Jacob finally consented for a second visit to Egypt and allowed Benjamin to go with his brothers.

Read Genesis 43:1-34. What effect had Benjamin’s presence on the course of events? 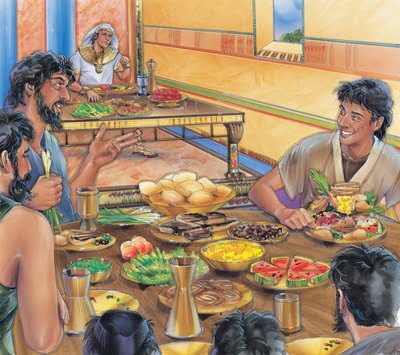 Joseph calls Benjamin “my son,” as a reassuring expression of special affection (Genesis 43:29; compare with Genesis 22:8). Joseph’s blessing refers to “grace” (Genesis 43:29), reminiscent of his begging for grace, which was not forthcoming (Genesis 42:21). Joseph returns to Benjamin the grace that he did not receive from his other brothers.

While Joseph’s brothers fear that they will be cast in prison because of the money that was returned, Joseph prepares a banquet for them because of Benjamin’s presence. It is as if Benjamin had a redeeming effect on the whole situation. When all the brothers are seated according to their ages and respecting the rules of honor, it is Benjamin, the youngest, who is served five times more than all the other brothers (Genesis 43:33-34). And yet, this favoritism does not bother them, unlike when Joseph was his father’s favorite many years ago, which led to their terrible actions toward both their half brother and their own father (Genesis 37:3-4).

“By this token of favor to Benjamin he hoped to ascertain if the youngest brother was regarded with the envy and hatred that had been manifested toward himself. Still supposing that Joseph did not understand their language, the brothers freely conversed with one another; thus he had a good opportunity to learn their real feelings. Still he desired to test them further, and before their departure he ordered that his own drinking cup of silver should be concealed in the sack of the youngest.” — Ellen G. White, Patriarchs and Prophets, Pages 228, 229.