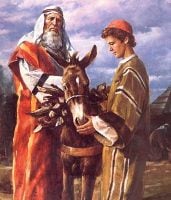 Why do you think Paul first appeals to Abraham as he looks to the Scriptures to validate his gospel message? (Gal. 3:6).”

Abraham was a central figure in Judaism. Not only was he the father of the Jewish race, but Jews in Paul’s time also looked to him as the prototype of what a true Jew should be like. Many not only believed that his defining characteristic was his obedience but that God had declared Abraham righteous because of that obedience. After all, Abraham forsook his homeland and family, he accepted circumcision, and he was even willing to sacrifice his son at God’s command. That’s obedience! With their insistence on circumcision, Paul’s opponents certainly argued along these same lines.

Paul, however, turns the tables by appealing to Abraham—nine times in Galatians—as an example of faith instead of law-keeping.

Whereas justification was a metaphor taken from the legal world, the word counted or reckoned is a metaphor drawn from the domain of business. It can mean “to credit” or “to place something to one’s account.” Not only is it used of Abraham in Galatians 3:6, but it occurs another 11 times in connection with the patriarch. Some Bible versions translate it as counted, reckoned, or imputed.

According to Paul’s metaphor, what is placed to our accounts is righteousness. The question is, however, On what basis does God count us as righteous? It surely cannot be on the basis of obedience—despite what Paul’s opponents claimed. No matter what they said about Abraham’s obedience, Scripture says that it was because of Abraham’s faith that God counted him as righteous.

The Bible is clear: Abraham’s obedience was not the ground of his justification; it was, instead, the result. He didn’t do the things he did in order to be justified; he did them because he, already, was justified. Justification leads to obedience, not vice versa.

Dwell on what this means—that you are justified not by anything you do but only by what Christ has done for you. Why is that such good news? How can you learn to make that truth your own; that is, to believe it applies to you, personally, no matter your struggles, past and even present?