↓
Home→Daily→Tuesday: Tablet of the Covenant

Although a covenant is based on promises, there are usually conditions to meet before the promises are fulfilled. The Abrahamic covenant involved the circumcision of all males who were either born to Abraham or his descendants. When Yahweh covenanted with Israel, He personally engraved the requirements for the relationship on tablets of stone (Deut. 9:8-11). These requirements, preserved in the Ten Commandments, were to form the basis of God’s everlasting covenant with all humans. 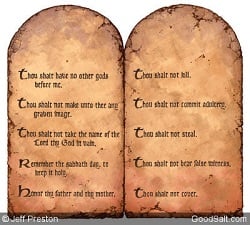 Under the Old Covenant at Mount Sinai, the Israelites and those who joined the community were obligated to demonstrate faithfulness to the covenant by keeping the Ten Commandments. When they violated a commandment they were expected to offer an animal sacrifice if they wished to have their sins forgiven.

Under the New Covenant at Mount Calvary, God’s people are still obligated to keep the Ten Commandments. However, when they sin they don’t have to offer continuous sacrifices, because Jesus is their full and complete sacrifice (Heb. 9:11-14). The New Covenant is so much better than the old because now, by faith, we claim the promises of forgiveness offered to us through the sacrifice of Jesus. There is hope for us only as we come under the Abrahamic covenant, which is the covenant of grace by faith in Christ Jesus.-Ellen G. White Comments, The SDA Bible Commentary, vol. 6, p. 1077.

What does it mean to have God’s law written in your heart? How does this differ from merely understanding God’s law as a code of obedience?