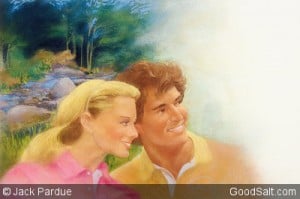 Picture this: Two beautiful people sit on a beach, the perfect breeze blows around them. The seagulls call all around them. They look deep into each other’s eyes. They’re smiling at each other as though they share the best secret in the universe. The camera zooms in for a close up; the music swells and then, one of them turns to the camera and says, “Everything is better when you follow Jesus.”

Oh, come on! That’s just silly, right? You can’t market Jesus and salvation like you would beer or soft drinks, can you? Maybe not. What would you think of an info-mercial where members of the live studio audience told about how much better their lives were since they’d accepted Jesus and the pitch-man offered to send you, for no extra charge, an additional out-pouring of the Holy Spirit all for three easy payments of $19.95?

Still doesn’t feel right, does it? Have you ever stopped to think that, in a way, we’re being “witnessed” to all the time?

To “bear witness” is a verb that means to “testify [or] authenticate.” Some synonyms are:

What would happen though if someone asked for thirty seconds of your time to influence you or witness to you to drink a beer, eat in a certain restaurant or use a particular laundry detergent? You’d think they were being very pushy. But advertising companies make billions of dollars a year to do just that. Think about the “witnessing” going on during the Super Bowl alone! And we look forward to being witnessed to, don’t we? Some people claim they only watch the Super Bowl to see the ads. We go online to get sneak peeks of the ads. News programs talk about which of the ads were the most popular. We forget that the ads aren’t part of the entertainment, but that we’re being influenced to do or to buy something.

The battle to influence us goes much farther than just ads – TV shows, movies, music, the internet. No matter where we go, someone is trying to influence us, in subtle and not so subtle ways, about how we should think and act … and we love it. Right up to the moment when someone brings religion into the mix.

That’s when things get uncomfortable, isn’t it? If someone wants to witness to us, we feel like he or she is “pushing his beliefs on us.” We might get a bit defensive and start pushing back, with proof texts and such. And, if we’re asked to witness to someone else, well, we go all shy and stuttery, don’t we? “Oh, I can’t witness to anyone. I haven’t any training.”

What would be different, though, if we changed the word witness for influence? That makes a huge difference, don’t you think? We think of witnessing as something we do, while influence is more like what we are. In fact, whether or not we are purposefully witnessing, we are always being an influence. Does that terrify you just a little bit? It does me.

You can probably think of several times when celebrity or athlete gets into some kind of trouble and someone makes a comment about how this person’s behavior will affect all the young people who look up to the celebrity. Almost invariably, the celebrity will say something like, “I never said I was anybody’s role model.”

It doesn’t work that way, though, does it? All of us are witnesses or influences all the time. We don’t get to pick and choose. We like to talk about the people who will come to us in heaven and thank us because something we did, either consciously or unconsciously, influenced them to give their lives to Christ. But what about the flip side of that coin, will there be anyone who is not in heaven because of something we have done or not done?

“Paul urged his brethren to ask themselves what influence their words and deeds would have upon others and to do nothing, however innocent in itself, that would seem to sanction idolatry or offend the scruples of those who might be weak in the faith. ‘Whether therefore ye eat, or drink, or whatsoever ye do, do all to the glory of God. Give none offense, neither to the Jews, nor to the Gentiles, nor to the church of God.’” (E.G. White, Acts of the Apostles, p. 317)

Whether we like it or not, our influence for or against God is never turned off. So let’s make sure that we are influencing people to want to get to know God more. How do we do that? Well, it’s not by proving that we have all the answers.

Winning the Bible truth debate only proves that we care more about being right that being a friend. Sometimes it’s better to make those debate points in your mind if you have to make them at all, and to just be a good friend who is listening and caring.

“Your success will not depend so much upon your knowledge and accomplishments, as upon your ability to find your way to the heart.” (E.G. White, Gospel Workers, p. 193)

Remember the old saying: “You can draw more bees with honey than with vinegar.” We can’t share Jesus if nobody wants to be around us, right?

“Our time here is short. We can pass through this world but once; as we pass along, let us make the most of life. The work to which we are called does not require wealth or social position or great ability. It requires a kindly, self-sacrificing spirit and a steadfast purpose. A lamp, however small, if kept steadily burning, may be the means of lighting many other lamps. Our sphere of influence may seem narrow, our ability small, our opportunities few, our acquirements limited; yet wonderful possibilities are ours through a faithful use of the opportunities of our own homes. If we will open our hearts and homes to the divine principles of life, we shall become channels for currents of life-giving power. From our homes will flow streams of healing, bringing life, and beauty, and fruitfulness where now are barrenness and dearth.” (E.G. White, The Adventist Home, p. 32)

I don’t know about you, but I want to put my life under the influence of the Holy Spirit so that witness for Jesus will be a blessing.

“You are the salt of the earth; but if the salt loses its flavor, how shall it be seasoned? It is then good for nothing but to be thrown out and trampled underfoot by men. You are the light of the world. A city that is set on a hill cannot be hidden. Nor do they light a lamp and put it under a basket, but on a lampstand, and it gives light to all who are in the house. Let your light so shine before men, that they may see your good works and glorify your Father in heaven.” Matthew 5:13-16