Read Acts 15:28-29. What four prohibitions did the council decide to impose on Gentile converts?

The main issue for which the council had been convened was satisfactorily resolved. Because salvation is by grace, believing Gentiles were exempted from circumcision when they joined the church. Yet, they should abstain from four things: (1) meat offered in sacrifice to idols in pagan rituals and then served in a temple feast or sold in the market; (2) blood consumption; (3) meat of strangled animals, that is, meat whose blood had not been drained; and (4) sexual immorality in its various forms. 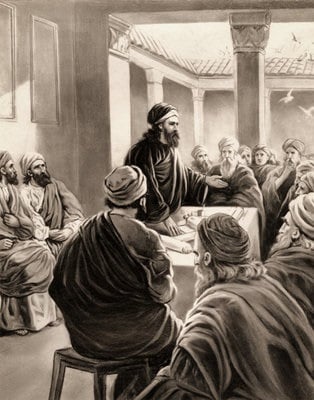 Most Christians today treat the dietary prohibitions (prohibitions 1-3) as temporary recommendations. Because those things were particularly repulsive to Jews, the prohibitions—they argue—were intended only to bridge the gap between Jewish and Gentile believers. It is also often claimed that all other Old Testament laws, including the Levitical food laws (Leviticus Chapter 11) and the Sabbath commandment (Exod. 20:8-11), which are absent from the list, are no longer binding for Christians.

The so-called apostolic decree, however, was neither temporary nor a new code of Christian ethics that excluded everything else related to the Old Testament. In fact, under the guidance of the Holy Spirit (Acts 15:28), the apostles and elders of the church reproduced the regulations of Leviticus Chapters 17-18 only concerning Israel’s resident aliens.

In the context of Leviticus, these prohibitions mean the renunciation of paganism. Any foreigner who wished to live in Israel had to abdicate those pagan practices to which he/she had grown accustomed (Lev. 18:30). Likewise, any believing Gentile who wished to join the church was required to take a firm stand against paganism.

This, however, was just the first step. Once in, he/she was naturally expected to do God’s will by obeying those commandments that are universal, pre-Mosaic, and not intrinsically ceremonial, such as the Sabbath (Gen. 2:1-3) and following the differentiation between clean and unclean food (Gen. 7:2).

That the decree was not temporary is clear, for example, from Revelation 2:14, Rev. 2:20, where the first and the last prohibitions are repeated, implicitly contemplating the other two, as well. In fact, historical evidence shows that the decree was still considered normative by Christians long after the New Testament period.