Jesus declared and demonstrated that He had the same power as the Father to overcome death. As the Father raises the dead and gives life to them, even so the Son gives life to whom He will (John 5:21, NKJV). Only God can state: I am the resurrection and the life (John 11:25, NKJV). 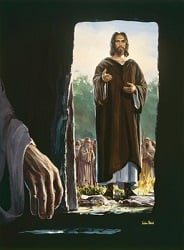 Another clear indication of His divinity is found in His assertion to preexistence. He came down from heaven (John 3:13, NKJV) because the Father sent Him (John 5:23). Then, again, He reaffirmed His preexistence: And now, O Father, glorify Me together with Yourself, with the glory which I had with You before the world was (John 17:5, NKJV).

In contrast with Abraham, who came into being (which is the literal meaning of the Greek root gínomai, translated here as was, Jesus announced Himself to be the self-existent One. He was not only there before Abraham’s birth but existed eternally. I am implies continuous existence. Furthermore, I AM is the title of Yahweh Himself (Exod. 3:14). The leaders understood, unmistakably, that Jesus claimed to be the I AM revealed in the burning bush. For them, He was guilty of blasphemy and therefore they took up stones to throw at Him (John 8:59, NKJV).

The Gospels show that Jesus, without showing disapproval, accepted worship from others. He knew very well that, according to the Scriptures, only God deserves man’s adoration, for He said to Satan: It is written, You shall worship the Lord your God, and Him only you shall serve. (Matt. 4:10, NKJV). Therefore, by accepting worship from others, He was revealing His divinity. The disciples on the sea (Matt. 14:33), the blind man healed (John 9:38), the women at Jesus’ tomb (Matt. 28:9) and the disciples in Galilee (Matt. 28:17) all worshiped Him openly, recognizing His deity. Thomas’s words to Jesus, My Lord and my God! (John 20:28, NKJV) would not have been spoken by a Jew back then unless he clearly understood that he was talking to God.

Read John 20:29. What are things that you have not seen, yet believe in? What are the implications of your answer for the whole question of faith?