When we read the stories of Jesus in the Gospels, we are often attracted to the gentle images of Jesus—His care for the sick and for children, His stories of searching for the lost, and His talk about the kingdom of God. This might be why other stories in which we see Him acting forcefully and bluntly—particularly against the religious leaders of His day and some of their practices—can take us by surprise. 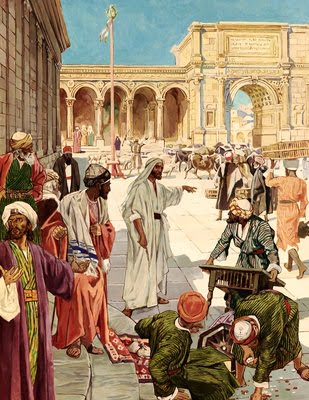 It is hardly surprising that this incident is included in each of the Gospels. It is a story filled with drama, action, and passion. Jesus was obviously concerned about the use of the temple in this way and about the replacement of true worship with the sale of sacrificial animals. What a desecration of all that those sacrifices were to represent, which was His substitutionary death for the sins of the world!

Such direct action fits well in the tradition of the Hebrew prophets. This point is suggested in each of the Gospel accounts by either Jesus or the Gospel writers quoting from Isaiah, Jeremiah, or Psalms to explain what was happening in this story. The people recognized Jesus as a prophet (see Matt. 21:11) and came to Him as He healed and taught in the temple court after He had driven out the merchants and moneychangers. It was the people who found healing in His touch and hope growing in their hearts as they listened to His teaching.

The religious leaders also recognized Jesus as a prophet—as someone who was dangerous to their power and the stability of their social order—and went away to plot to kill Jesus, in the same way as their predecessors had plotted against the prophets in previous centuries (see this contrast in Luke 19:47-48).