Human relationships all too often break down. We become estranged from one another. The person who was once our close friend becomes, over time, someone we distrust. However, such a broken relationship can be mended. When that happens, we experience the wonder of reconciliation. Few human experiences are as sweet as this.

How does reconciliation lie at the heart of Christ’s incarnation and His role as Master Teacher? 2 Cor. 5:16-21. 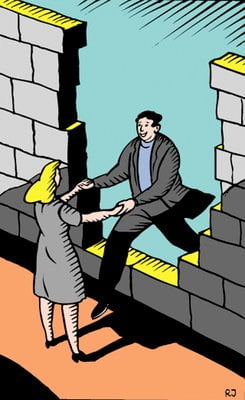 If we feel blessed when a relationship with another human being is restored, how grand should we feel when we are reconciled to God? In 2 Corinthians 5:16-21, Paul is clear about who is doing the reconciling – God the Father has taken the lead in mending our broken relationship with Him. And He has done this reconciling work “through Christ”

Colossians 1:15-20 is another of the great New Testament passages on Christ’s incarnation. Often thought to be a hymn, the first half of the passage discusses Christ’s role in creation (Col. 1:15-17), while the last half focuses on Christ’s role in redemption (Col. 1:18-20). Through Christ’s role as Creator-Redeemer, God reconciles all things to Himself. The work of reconciliation that God accomplishes through Christ is cosmic in scale, impacting “all things, whether on earth or in heaven, by making peace through the blood of his cross” (Col. 1:20, NRSV).

While we could never match the cosmic scale of the Master Teacher’s work as reconciler, we are invited to participate in “the ministry of reconciliation” in our own sphere (2 Cor. 5:18). Could this be what was in Jesus’ mind when He prayed, “As You sent Me into the world, I also have sent them into the world” (John 17:18, NKJV)?