John W. Fountain was, at one time a national correspondent for the New York Times and is now a professor of journalism at the University of Illinois at Urbana-Champaign. Back in 2005 he gave his testimony on the NPR program, All Things Considered. Here is a excerpt.

“I believe in God. Not that cosmic, intangible spirit-in-the-sky that 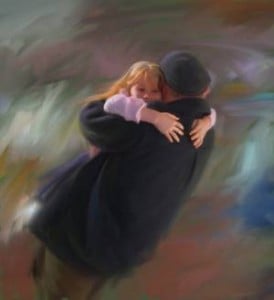 Mama told me as a little boy ‘always was and always will be.’ But the God who embraced me when Daddy disappeared from our lives—from my life at age four—the night police led him down the stairs, away from our front door, in handcuffs. The God who warmed me when we could see our breath inside our freezing apartment, when the gas was disconnected in the dead of another wind-whipped Chicago winter, and there was no food, little hope, and no hot water.
“The God who held my hand when I witnessed boys in my ‘hood swallowed by the elements, by death, and by hopelessness; who claimed me when I felt like ‘no-man’s son,’ amid the absence of any man to wrap his arms around me and tell me, ‘everything’s going to be okay,’ to speak proudly of me, to call me son.
“I believe in God, God the Father, embodied in his Son Jesus Christ. The God who allowed me to feel his presence—whether by the warmth that filled my belly like hot chocolate on a cold afternoon, or that voice, whenever I found myself in the tempest of life’s storms, telling me (even when I was told I was ‘nothing’) that I was something, that I was his, and that even amid the desertion of the man who gave me his name and DNA and little else, I might find in Him sustenance.
“I believe in God, the God who I have come to know as father, as Abba—Daddy.
“It wasn’t until many years later, standing over my father’s grave for a conversation long overdue, that my tears flowed. I told him about the man I had become. I told him about how much I wished he had been in my life. And I realized fully that in his absence, I had found another. Or that he—God the Father, God my Father—had found me.”1

When Jesus lived here on earth, He taught His followers to call God, our Father. Let’s take a few minutes and try to wrap our minds around what having God as our Father really means. Sometimes Christians talk about being a child of God in an almost flippant way, but being God’s child carries some heavy implications.
The best place to start is John 3:16-17:

“For God so greatly loved and dearly prized the world that He [even] gave up His only begotten (unique) Son, so that whoever believes in (trusts in, clings to, relies on) Him shall not perish (come to destruction, be lost) but have eternal (everlasting) life.
“For God did not send the Son into the world in order to judge (to reject, to condemn, to pass sentence on) the world, but that the world might find salvation and be made safe and sound through Him.”

I love the way the Amplified Bible translates those verses, but in the King James Version (the one I memorized) it says “that whosoever believes” will not have to die the second death. I also like the way the Amplified Bible sharpens the meaning of the word ‘believe’ by adding “trusts in, clings to,” and “relies on.” Isn’t that the type of relationship most of us have with our fathers? In most cases, we adore our earthly fathers and love spending time with them. And, most earthly fathers would give their lives for their children – imagine how much more our Heavenly Father would gladly do for each and every one of us.

Unfortunately not everyone has an earthly father who makes that kind of relationship with God easy. Some have had fathers who make it difficult to imagine a father who loves us unconditionally. They make it easier to see an arbitrary and judgmental god, who is trying to find reasons for us to be kept out of Heaven, rather than to let us in.

The truth is that even though the human race has been nothing but trouble since it was created, God loves us, we are His.

I found an example of this that really speaks to me because I work with people with disabilities every day.

The L’Arche organization consists of communities all over the world that cater to people who have severe disabilities. The founder, Jean Vanier, tells the story or Francoise, a 76-year-old woman that everyone called “mamie.” According to Vanier, Francoise “was blind, bedridden, and incontinent. She could not feed or dress herself. She was unable to communicate through words. And yet the entire staff of this L’Arche community followed the words of Scripture and showed Christlike love for ‘mamie.’

“But showing unconditional love wasn’t always easy. One of the staff assistants, a young man called ‘Louis,’ was assigned to take care of mamie. Louis was disappointed because he did not feel drawn to her. Faithfully, as he was asked, he fed mamie, but he found it tiresome. Then one day, she placed her hand on his hand and smiled. It was, he said, a special meeting, a moment of transformation, a moment of grace. From that moment on, he loved being with her. What he had found tiresome and difficult became a blessing. Love had made all the difference.
“Then one day a woman came to visit the director of that same L’Arche community. As the visitor watched mamie struggle through life—weak, blind, voiceless, powerless to feed or dress herself—she offhandedly asked the director, ‘What’s the point of keeping Francoise alive?’ The director looked at the visitor and said, ‘Well, madam, because I love her.’”2

I can so relate to that story because I have clients who are in much the same condition whom I dearly love.

I can imagine the angels and other perfect beings looking down on earth. They watch us struggle and fail and struggle again. They see us hurt one another and God, and they ask God, “Why do you keep these troublesome, sinful little creatures alive?” And He quietly answers, “Because I love each and every one of them.”

“The relations between God and each soul are as distinct and full as though there were not another soul upon the earth to share His watchcare, not another soul for whom He gave His beloved Son.” (Ellen G. White, Steps to Christ, p. 100)

So, whosoever calls God their Father – their Daddy, will get to spend eternity with Him. I can’t wait!