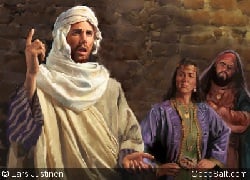 My first job after graduating from Walla Walla College was in the public relations department of the General Conference. Now, nearly 50 years later, I am self-employed. I joke about how far I’ve fallen in my career, but it is a joke.

One of my main tasks at the “GC” was helping to produce a periodical called Tell.” Its purpose was to share with local church members where and how ministers and church members had enjoyed success in their endeavors to share their church’s good works with others. A copy also went to the head pastor at each church.

The Bible text that inspired the publication and my work in the department was “Let your light so shine before men, that they may see your good works, and glorify your Father which is in heaven.” While I was working at the GC, our membership reached one million. We were almost overwhelmed with joy. (Now membership is about 17 million.)

Tell is no longer published. The assignment of telling our members what is being spread around the world and in local settings is apparently too big for one department to handle. Today we learn about our church’s good works from a variety of sources such as publications like the Review or those produced by union and local conferences. We also hear about them at camp meeting and are often invited to hear and see reports of what our members are doing. Our computers put us in touch with members and groups in all climates and countries. Then there are news reports, like the recent vindication of Lindy Chamberlain and how her demeanor and gentle spirit spoke volumes about her faith.  And reports of just plain hard work that our members do for others, such as ADRA’s outstanding work in troubled places of the world, hundreds of Community Services centers, and so much more. I could fill pages and pages just listing what’s going on.

And yet we still have members who worry about how self-centered it is to describe our successes, and members who refuse to participate in anything that could attract attention. Where do you stand in this milieu of media, desperation, and cynicism?

1. The Book of Acts. Would you say that the book of Acts is a model of success stories of the godly kind? Isn’t the gospel story complete without the book of Acts? Suppose the New Testament compilers didn’t include the book of Acts? What, if any, questions would remain unanswered? Why do you think the disciples were so eager to share with Jesus “what they had done and what they had taught”? Remember the last time you saw a youngster run into the house breathless to tell Mom or Dad about something exciting that had just happened? Should we be that eager to report and rejoice over manifestations of the Spirit of Christ in our lives? How can we learn to do that?

2. Reporting—a Bible principle? Since there is no command in Scripture requiring us to report our good works, can it be a Bible principle? How? What effect do reports have on plans? Do corporations examine reports before they make key decisions about their business? What kind of reports would be especially advantageous for a church to consider while making plans for the future? Do you think Peter and John were eager to give a report to their companions after spending a night in jail? How can a report of recent events trigger a plan for the future? Do you find the weekly Sabbath school class a good time to report witnessing opportunities you and others in the class been able to experience?

3. God has done it. Do you think you’ve ever embarrased a church pastor by complimenting him/her on how wonderful, beautiful, or otherwise tremendous a sermon has been? What do you think a pastor would rather hear than compliments after the preaching service? Do good reports of work done for God ever trigger feelings of jealousy? How could that be? When a new pastor or conference leader takes over this new position of responsiblity, what is the first thing local members want to know? How does the pastor establish himself (herself) with the new congregation or group of churches. What about people who are new to the church? How can God direct them to a pleasant and helpful walk with Him in a new church setting?

4. Importance of reporting. Do you like filling out membership cards or responding to quesionnaires? Why or why not? Some churches assign a member to take attendance every Sabbath and keep track. Does yours? Should it? Suppose you want to build a new church. What reports would you need to establish that a new church is needed? or can be afforded? Are you dismayed reading that some of the early believers gave way to confusion instead of praise when they learned what Paul’s missionary efforts had been? Are souls won to Jesus differently in Southwest USA compared to Northeast USA? In big cities compared to tiny communities? How important are reports in laying plans to witness in different areas of the country where fellow members live and serve the Lord?

5. Reporting and Motivation. Have you ever imagined that you were one of the twelve spies sent to explore the land of Canaan? How sure are you that you would “vote” with Caleb and Joshua? Can a Christian be tremendously successful in getting things done and miss the objective of demonstrating God’s love? When confronted with an opportunity to portray a more effective witness, how do  you tend to respond? Do you look for problems? Do you look for a tremendous success? Weren’t the “negative” spies right in their evaluation of the nation of Canaan? What did they forget? What do we too often forget when we face opportunities in our own lives?

6. To God be the glory. Is it possible for a person turn in a great report for individual effort without boasting? Can even humble-sounding and God-centered praise reports actually come from corrupt and selfish thoughts? What do you think is an equivalent current population to the Gentiles of the early Christian church? What if a church in town decided to become Adventists? Would you hesitate a bit before paying a visit to these people? Why? Is our church ever “selfish” in holding our beliefs to be superior to those of all others? Is it possible for someone of another faith system to have a saving relationship with God? If you said “Yes,” how do you approach that person? Do you ever join friends and neighbors in giving praise and awe to God?

7. Bad news. What is the purpose of flashing your blinkers to signal a turn when you’re driving downtown?  Do you signal because it’s the law or because you think it’s a good idea? or both?  What would your church do if the head elder were hauled into court to answer questions about his involvement in a fraud case? Suppose the reporter comes to your church and confronts the pastor. Would it be better for the pastor to tell the reporter what he knows? Or try to keep the incident out of the newspapers by saying everything is all right? Or admit there are serious questions and he is trying to get more information? Or quip that the guy was always long on cash and short on work? Or could he keep the encounter with the reporter upbeat and positive by mentioning the goals and mission of the church? What would you do?