The term “sanctuary” comes from the Hebrew “miqdash” and means “sacred place, sanctuary, holy place” (Strong’s Exhaustive Concordance H4720). It has the sense of being holy – something above the common or something consecrated. It is a term that is strongly associated with the word to sanctify which in its most basic sense simply means “to set apart.” So the sanctuary is a place that is set apart for a particular purpose and, in this case, for God’s specific purpose. 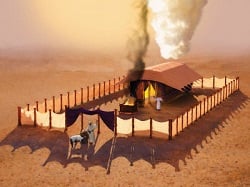 We set areas aside as safe havens for animals that we call sanctuaries, and we often consider a church, especially the main room, as a sanctuary that is set apart from the rest, a place of rest and protection from the stresses of the world, a place where we can learn heavenly things.

In the Bible we first encounter the word sanctuary in Ex 15:17 which is a part of the song of Moses,

“You will bring them in and plant them
In the mountain of Your inheritance,
In the place, O LORD, which You have made
For Your own dwelling,
The sanctuary, O Lord,
Which Your hands have established” (NKJV).

It is interesting that this is set in the context of a protective environment immediately following the crossing of the sea which freed the Israelites from slavery while destroying their enemies. It is a song of salvation and protection; and it is also the same theme that we find in the sanctuary.

As one looks at the sanctuary built by Moses it is obvious that it is not designed to physically protect those on the inside, since the courtyard is surrounded by a wall made of woven fabric which has no real strength to withstand physical assault. This, then, brings up a very important understanding of the sanctuary: Its real purpose is to teach spiritual things, and it was designed to be used as an object lesson.  Therefore, it involves a lot of symbolism. As the Sabbath lesson says, “God devised the earthly sanctuary, a pictorial representation of the plan of salvation” and that, “When God established the sanctuary on earth, He used it as a teaching tool.”

After Israel accepted the covenant at Sinai which included the Ten Commandments, God presented Moses with a pattern to use in constructing a sanctuary (Ex 25:40; 26:30). What that pattern was is to somewhat of a mystery. We do know that the earthly sanctuary was built as an image of the heavenly sanctuary (Heb 8:1-5), but we are never told the dimensions of the heavenly sanctuary. The idea of exact equivalence often breaks down in the details of ministry. For instance, the earthly sanctuary required a daily sacrifice, but concerning the real Lamb of God, Paul writes that “the death that He died, He died to sin once for all” (Rom. 6:10 NKJV). And in the heavenly sanctuary, the daily ministry actually overlaps the ministry of the Day of Atonement, unless one wishes to believe that since 1844 babies are judged at the time of birth. So the particular place where Jesus is at any one time within the sanctuary (holy place or most holy place) has no exact equivalence. Thus we may end up with serious theological problems if we only focus on spatial relationships within the heavenly sanctuary.

We understand that heaven is the capital of the universe, and we are told, “Now this is the main point of the things we are saying: We have such a High Priest, who is seated at the right hand of the throne of the Majesty in the heavens, a Minister of the sanctuary and of the true tabernacle which the Lord erected, and not man” (Heb. 8:1-2 NKJV).

The Heavenly sanctuary is the reality after which Moses patterned the earthly sanctuary. It was a place set aside to demonstrate how God was going to deal with the sin problem.