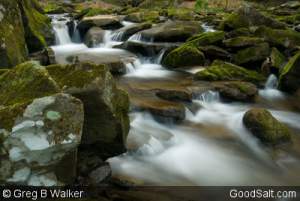 I am a Christian who believes that God created everything in six literal days and then literally rested on the seventh day. Having said that, I’m not sure that I’ve spent enough time thinking about how that should shape my interactions with the things that God created in, say, the first five days of Creation week. 1

That doesn’t mean that I’m in favor of strip-mining or mowing down the rain forest or anything like that, it’s just that I’ve never really thought about everything coming from God’s own hand.

People read the words “have dominion over” and “subdue it” and decide that we have the right to do absolutely anything at all to the planet and not worry about what the consequences might be. I’m pretty sure though, that showing Creation who’s boss, is not what the Creator had in mind.

On a very small scale, it might be like when my aunt and uncle would go on their medical missionary trips every year. They would ask me to “take care of things” while they were gone. That meant water the indoor plants, feed the cat, and generally keep an eye on things.

What if, while they were gone, I decided that they didn’t need all those plants and pulled up half of them or that they needed a dog instead of a cat? My aunt and uncle would not be pleased with my stewardship of their home, would they?

Does being stewards of Creation mean that we should value it above other humans or even God, Himself?

It seems kind of odd that, in general, the environmentalist movement is primarily made up of individuals who believe that life is governed by belief in the phrase, “survival of the fittest.” While those of us who believe a loving Creator made the earth and everything in it for us, His children, really don’t get too worked up over saving the snail darter or whatever.

Shouldn’t we be the leading advocates for Creation and caring for the planet? Is there a way to honor God by taking good of everything He made without putting His creation ahead of Him?

“The message reverberates through culture beckons us to ‘go green’ because we will look better and feel better and fit in …. [But as followers of Christ] we have deeper reasons to go green. We serve the Creator of the planet …. He created the earth and took the time to tell us his plan for it. The God of the universe has given us the great task of caring for our planet …. We have an operating manual for our planet right in front of us in the Bible, and we must allow that manual to change our thinking and behavior.” 2

Do we consider ourselves part of God’s plan for taking care of His Creation? Or are we here to get all we can out of it?

Did you know that God gave instructions that would have helped avoid the dustbowl of the early twentieth century? It’s called (Are you ready for this?) the “Law of the Sabbaths.”

“Six years you shall sow your land and gather in its produce, but the seventh year you shall let it rest and lie fallow, that the poor of your people may eat; and what they leave, the beasts of the field may eat. In like manner you shall do with your vineyard and your olive grove.” Exodus 23:10-11

Verse 12 goes on to remind folks to let their work animals rest on the weekly Sabbaths as well. Interesting, the Sabbath is made for man, and man is then supposed to make sure that little piece of creation stays healthy by sharing Sabbath rest with his animals and his land.

Imagine what might happen if one day out of seven, all unnecessary worked stopped. What effect would that have on energy consumption and air pollution? Do you think it would be significant?  I don’t know, maybe? I’m pretty sure it won’t happen, though. Why? The same reason it quit happening in the first place.  Humans are selfish.

“Selfishness consists in dethroning reason from the seat of government and enthroning blind desire in opposition to it. Selfishness is always and by necessity unreasonable. It is a denial of that divine attribute that allies human beings to God and makes us capable of virtue. Selfishness dethrones reason and sinks human beings to the level of a brute. …

“It is a contempt for the voice of God within in him, and a deliberate trampling down of the sovereignty of his own intelligence. Shame on selfishness! It dethrones human reason, would dethrone the Divine mind and would place blind lust upon the throne of the universe.”3

Selfishness causes us to abuse the gifts God has given us, even the planet we live on. Our selfishness has brought us to a place where we value ourselves, our wants and desires about anyone or anything else. We value our planet only for what we can get out of it. We don’t even value human life if it stands between us and something we want. Our greed even causes us to injure our own bodies as we consume too much of the wrong things just because we want them, not because we need them.

As Christians we are in the unique position of protecting God’s Creation. We know its true importance. We aren’t caring for one random rock floating in random galaxy formed when a random star exploded. We are stewards of an extravagant gift made especially for us by our God who loves us. Every atom, every molecule was formed by His own hand and still bear His finger prints.

“… it was sin which marred God’s perfect work; …thorns and thistles, sorrow and pain and death, are all the result of disobedience to God. … see how the earth, though marred with the curse of sin, still reveals God’s goodness. The green fields, the lofty trees, the glad sunshine, the clouds, the dew, the solemn stillness of the night, the glory of the starry heavens, and the moon in its beauty all bear witness of the Creator. Not a drop of rain falls, not a ray of light is shed on our unthankful world, but it testifies to the forbearance and love of God.”4

Many of us would like to think that we don’t have to worry about the world around us because Jesus is coming soon. But even before sin, Adam and Eve were to tend the Garden. What makes us think that we are any less responsible now?