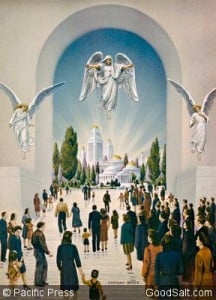 He and Sally spend the whole night in the pumpkin patch but the Great Pumpkin doesn’t come. Sally gets furious with Linus because she missed all of the Halloween fun. Charlie tried to console Linus by reminding him that everybody does stupid things sometimes. Linus gets mad when Charlie characterizes his sincere belief in the Great Pumpkin as stupid. One more time he repeats what he believes about the coming of the Great Pumpkin.

Ouch! That plot line could be Charlie Brown’s “Great Disappointment.” Linus found out something that many of us already know. It’s hard to build up and maintain anticipation for something we don’t really understand.

When we talk about the New Earth or Heaven, it’s sometimes hard to build up some lasting excitement or anticipation because of our limited frame of reference.

“But as it is written: ‘Eye has not seen, nor ear heard, Nor have entered into the heart of man The things which God has prepared for those who love Him.” 1 Corinthians 2:9

On top of that, Satan has done a great job of dumbing down what Heaven will be like. Just this week, one of my clients asked me what we would be doing in Heaven. His picture of eternity was baby angels sitting around on clouds playing harps. That’s not an eternity that looks very interesting. In fact, it looks downright boring!

Besides, lots of folks don’t see the New Earth as anything different from Heaven because the New Earth doesn’t make much sense alongside the widely held beliefs of immortal souls and eternal hell. When I tried to explain it to my client this week, I found out that I had to deal with those other concepts before we could make any sense of what the New Earth was all about.

That’s a whole lot of ground to cover to answer a simple question about eternity. One thing I realized was that without the New Heaven and the New Earth the story of Salvation has no ending. The New Heaven and the New Earth are the period at the end of fallen humanity’s sentence – our “happily ever after.” It’s where God is finally able to reverse permanently the effects of that bite of fruit in the Garden of Eden. It’s a guarantee that we will never have to deal with the effects of sin ever again. It’s confirmation to all of the universe that God does play fair and Satan lied.

Can you imagine living with the realization that the Great Controversy is over? Take a minute and try to see if you can get a taste of what that might feel like. It’s really hard! It’s probably like having lived all of your life in an active war zone and trying to imagine living in peace. Imagine trying to explain to a child in Israel, whatever their religion, what living in peace is like. It would sound nice, but they wouldn’t really have any frame of reference for such a concept.

What do we do with all our time in the New Earth? When my client and I were talking about it, he had a hard time understanding that having streets of gold wasn’t about greed. Thinking about it with our sinful minds, we figure that if someone isn’t greedy, why would they show off all their gold by paving the streets with it? Can you imagine living without always wanting something more? Without needing to sleep? Without deadlines?

My father was 48 when I was born so I was still in high school when he retired. He was interested in so many things that once he was free of necessary work, he finally had time to do just what he was interested in doing. He was busier in retirement than he had been when he went to work every day. I can imagine that! Can you? So, can you imagine spending eternity gardening and not having to worry about bugs, fungus, drought, freezes or (in my case) so much heat that the tomatoes and green peppers practically cook before you can pick them?

For those of us who aren’t gardeners, what will we spend eternity doing? I know I want to spend time singing and not worrying about being on pitch. I’ve always enjoyed Sandi Patti and, when I was younger, I remember praying for her so that I’d be able to spend eternity being one of her backup singers.

Do you like history? Wouldn’t it be amazing to study the entire history of the earth, not just as we know it now, but with the added insight of being able to study God’s hand in historic events? What about being able to interview people who were actually there? How fantastic would that be?

Do you like sports? You’d be able to run any kind of scenery you choose – and not get tired or dehydrated. Skiers could ski without having to worry about falling and breaking something. Swimmers could swim with dolphins and not have to worry about sharks or jelly fish. Do you think you could hold your breath for a really long time? Or maybe you wouldn’t have to come up for air at all. Can you imagine deep-sea diving without any scuba gear?

Can you think of something(s) that you love to do that you could happily spend eternity doing? How do you think that thing that you love will be better, more fun, more interesting without the effects of sin to make it harder? Do you think that quilters and other stitchers will be able to find some way to engage in a similar activity? What about mechanics? Architects?

Is there something that you love to do that you would love to have unlimited time to do? For those of you who would love to sleep for about three weeks, wouldn’t it be wonderful to not feel that tiredness – to feel like you have the energy to do whatever you wanted to do?

There will be an infinite number of things available for us to do in the New Heaven and the New Earth. Some of the things we love to do now and think we would love to spend eternity doing, we won’t even care about. It doesn’t matter. We will never run out of things to do.

Most important of all, no matter whatever else we do or don’t do, we will have unlimited contact with Jesus Christ, our Savior. Actually, can you imagine wanting to do anything else ever, if you could spend time with Jesus whenever you wanted and for as long as you want?

Come to think of it, that’s really all I need to think about to start getting excited about the New Earth. I want to spend eternity living with Jesus.

“We are living in a most solemn period of this earth’s history. There is never time to sin; it is always perilous to continue in transgression, but in a special sense is this true at the present time. We are now upon the very borders of the eternal world and stand in a more solemn relation to time and to eternity than ever before. Now let every person search his own heart and plead for the bright beams of the Sun of Righteousness to expel all spiritual darkness and cleanse from defilement.

“To us who are standing on the very verge of their fulfillment, of what deep moment, what living interest, are these delineations of the things to come—events for which, since our first parents turned their steps from Eden, God’s children have watched and waited, longed and prayed!

“Fellow pilgrim, we are still amid the shadows and turmoil of earthly activities, but soon our Saviour is to appear to bring deliverance and rest. Let us by faith behold the blessed hereafter, as pictured by the hand of God.” (E.G. White, The Adventist Home, page 549)