“But in keeping with his promise we are looking forward to a new heaven and a new earth, the home of righteousness.” 2 Peter 3:13 NIV 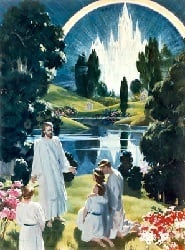 1. Creation continues forever. Have you ever longed for the new heaven and earth that Peter talks about in 2 Peter 3? How can God, mighty Creator though He is, keep on creating forever? Won’t He eventually reach the point where there there’s nothing left to create? Will you and I have an opportunity to watch Him at work? Or even lend a helping hand? What part of the universe would you most like to help re-create?

2. A new beginning. Are science and the Bible totally at odds with each other? Is it impossible to be both a scientist and a Christian? According to your lesson guide, what one belief do scientists and Christians share concerning the destiny of this earth? Did God create suffering and death? If not, who did? Is there anything beneficial about pain and sorrow? What does God offer instead?

3. Made from dust.  Adam was formed from the dust of the earth, Eve from the body of Adam. After death, what do all of us become, eventually? Are God’s angels going to dig into graves and pull up healthy beings? What about people who drown or whose ashes have been scattered over hundreds of miles? And what about people who have been dead for thousands of years? Is God going to collect all of our atoms and rebuild us? Or does He have another way to bring us to life? Will we look anything like we do now? If not, how will we be recognized?

4. Human dominion returns. What role did God give Adam and Eve when He created the world? How long did this power over the earth continue? Who (or what) took over after Adam and Eve fell away from the promises God gave them? Do you think the devil is pleased with the power that God allows him to have? In what way(s) is the evil one in charge of the earth and all who live on it? Have you ever felt the grip of sin pulling you down? Have you ever felt the grand relief of being free from the devil’s control? What will God lead us in doing throughout eternity?

5. Restoration. Have you ever wondered what fierce beasts with sharp teeth and fast feet will be like in the earth made new? Have you ever visited a zoo and asked yourself which of the animals on display will be in heaven? And which ones will need definite modifications? How will God change creatures from being fierce and violent to being tame and enjoyable? Or will He simply get rid of all the hunters and the hunted? Can you and I grasp the marvelous changes God will make when he restores nature? Should we even try?

6. Relationship with God. Have you ever been separated from someone who meant everything to you? Do you think Adam felt almost overwhelmed by not hearing God’s gentle voice in the garden any more? What about Eve? What will our relationship with God be when there is no more sin, pain, or death? Does God know us now as well as He will in the earth made new? Do we know God now the same way as we will? How is this amazing restoration between God and man possible? What has to happen to bring it to be?

7. One pulse. Ellen White says that “one pulse of harmony and gladness beats through the vast creation” when the great  controversy ends. Does that sound like a vast concert? Does it make you dizzy to think of such a festival?

8. Restored by the gospel. Do we always preach the gospel of restoration? Or do we sometimes focus more than we should on the work of correction? Is correction always wrong?

9. God is central. Is God and His infinite love for us more important than any other Bible doctrine? If not, can you think of a more central truth of His kingdom?