Many of you will remember a potato chip ad campaign from many years ago in which the slogan was, “Nobody can eat just one.” Why did that slogan work so well for the potato chip brand? Because their potato chips left such a good taste in our mouths that it left us wanting more. 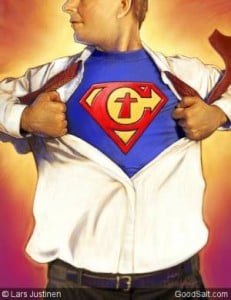 Have you ever noticed, as you go through your day, that some people who touch your life leave you with a bitter taste and some leave you wanting more? What do you think causes such different “after-tastes?” I’m not altogether sure. Some people might claim that it’s all about personal chemistry. That may be, but I hope there’s more to it than that. I don’t have any control over “personal chemistry.” What I do have control over is how I approach people and how I treat them based on my relationship with Jesus.

Have you realized that once people know you are a Christian, everything you do or say in no longer a reflection of you but of Jesus. Is that a little bit terrifying?
On the Christian radio station to which I listen, they play a short dramatization that makes that point very well – A policeman pulls a woman over and asks for her license and registration. The baffled woman asks the officer if she’s run a red light or committed any other traffic violation. The officer explains that he had been driving behind her for several miles and he had observed her as she shaking her fist and yelling at several drivers who were driving too slowly to suit her, as she swerved around one driver and cut off another. The woman is still confused.

“Did I break any laws, officer?”

“No,” he replies, “But when I saw the ‘Jesus loves you and so do I’ bumper sticker on the bumper, I assumed the car was stolen.”

Add to that, stories like this one from Steve Sjogren’s book, Changing the World Through Kindness:

“Not long after we moved [into our first house in California], my wife, Janie, and I picked up on the tension between a couple of neighbors. One was a very outspoken churchgoer, while the other was an unbeliever. I knew I was in the hot seat when the unchurched man struck up a conversation with me as we were both working in our yards.

“‘Say, Steve, aren’t you a pastor?’ It seems implicit in the public’s understanding that pastors exist to serve as referees in times of conflict, so I reluctantly listened as this troubled man opened up about the neighbor he’d never understood. He unfolded a long history of numerous conflicts over small issues. …

“Then he looked up and sighed, ‘But the most recent problem takes the cake. We received a letter from his attorney threatening to sue us if we don’t trim a tree that borders his yard. It seems strange he didn’t just come over and ask me to take care of the tree before he went to his attorney.’ …

“With a little wink this streetwise unchurched man continued, ‘You know, I was getting ready to trim that tree, but now there’s no way I’m going to do anything until he forces me. I will gladly go to court just so I can have a story to tell about being sued by Christians over an orange tree.’ He summarized his thoughts with a haunting observation: ‘I guess sometimes Christians love us—they just don’t like us.’”1

Is it any wonder then that, according to the Barna Research Group, nine out of ten people born between 1965 and 2002 would use the word “judgmental” to describe Christians? Additionally, even though 85 percent admit that they know at least one person who calls themselves a committed Christian, only 15 percent thought that those Christians they knew lived any differently than anyone else.2

So, have you thought of what kind of “after taste” you leave behind? Are you a potato chip Christian who leaves them wanting to know more about your Savior?
Wouldn’t it be terrible if something we said or did in an unguarded moment left a bitter taste for Jesus with someone who saw or heard us? Jesus’ last words on earth are found in Matthew 28:18-20:

“And Jesus came and spoke to them, saying, ‘All authority has been given to Me in heaven and on earth. Go therefore and make disciples of all the nations, baptizing them in the name of the Father and of the Son and of the Holy Spirit, teaching them to observe all things that I have commanded you; and lo, I am with you always, even to the end of the age.’ Amen.”

Many of us read the Great Commission and think to ourselves that that isn’t for us. That’s for the preachers and the evangelists of the world to worry about.
Sure, they can reach a whole lot more people than we, individually, ever will. But, (and this is huge) the preachers and evangelists have a much, much more difficult time if some interaction we have had with our neighbor, our school mate, our colleague, our family member, has left a bitter taste behind.

We have so many opportunities every single day, to touch people for Jesus. We don’t have to do anything big. We don’t even need to mention Jesus’ name. It’s as easy as sharing our potato chips. The main thing is first to show genuine interest in each person. Ask questions about their lives and really listen to their answers.
“Did you grow up around here?”
“Are you reading anything interesting these days?”
“What are some of the challenges you’re facing at work right now?”

Each time we ask questions and listen to the answers we’re offering a little taste of Jesus love and interest in them and their lives and struggles. As we get to know them, we can ask deeper and more important questions.
“Looks like you’re experiencing quite a bit of turmoil at work right now, how are you able to balance it all out?
“I just read a great Bible verse that I’d like to share with you.”
“I’d like to tell you a story about a shepherd and the sheep he lost and found.”
“I’d really like to pray for you, would you mind?”

Besides being honestly and truly interested in people and what they’re going through, we can also offer to help them with the little tasks we all get buried under every day.
“Those bags look heavy, may I help you carry them?”
“I’ve notice you’ve been working late, would you like some help with your yard?”

Every sincere question and good deed are potato chips offered…and nobody can eat just one. With the Holy Spirit’s help, these small things will awaken a hunger for Jesus in the hearts of our friends and family.

I want to be a potato chip Christian, don’t you?